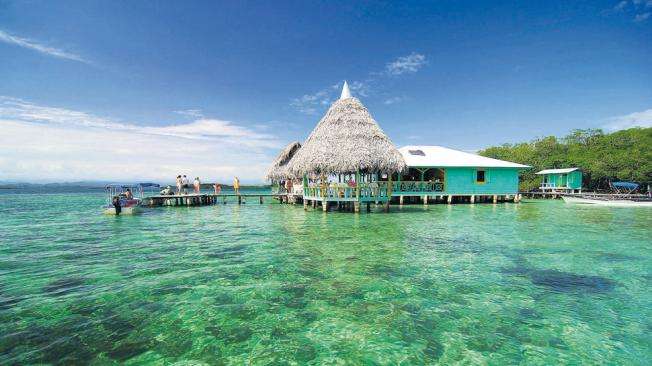 Panama City is the capital and largest city of the Republic of Panama and the most cosmopolitan capital in Central America.  Its skyline screams urban chaos while cobblestones link boutique hotels with underground bars and crumbled ruins in the peninsula of Casco Viejo When visiting Panama City, I highly suggest taking an hour flight to Bocas del Toro.  It’s extremely rare in this world that you find an atmosphere so seductive, primitive and unforgettable…think Costa Rica 20 years ago.  The islands are surrounded by the beautiful Caribbean ocean, packed with lush and unique tropical vegetation and immersed in numerous cultures including the indigenous Westin Caribe people, latinos and extraneros. 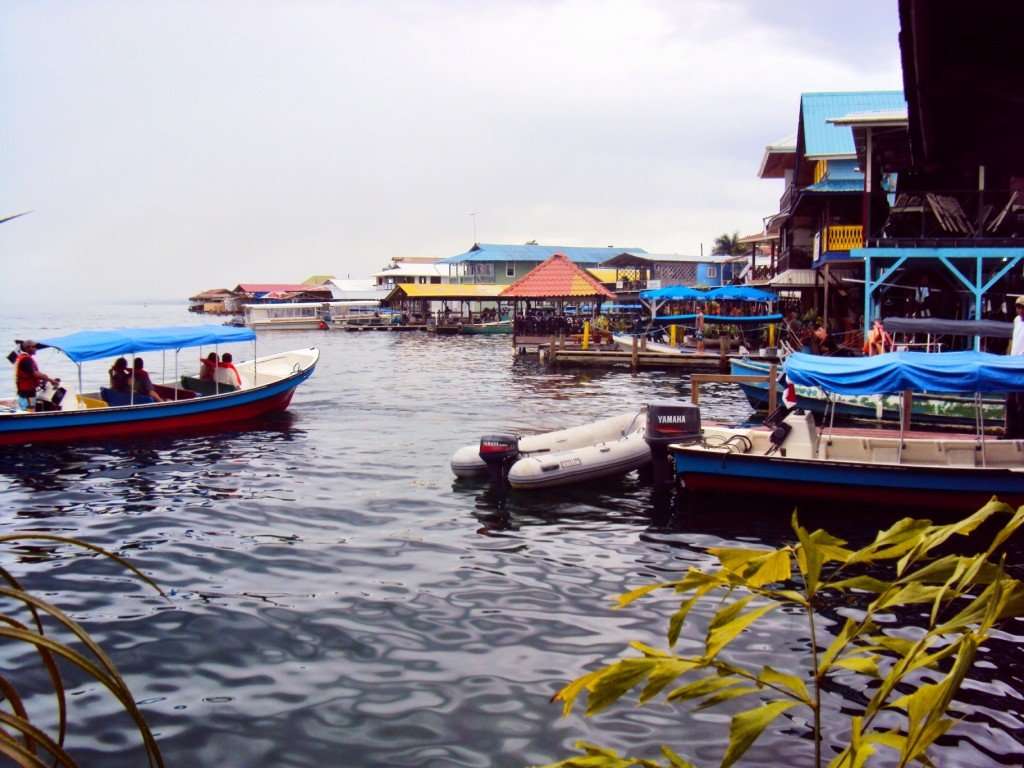 The best time to visit Panama is during the summer dry season from mid-December to mid-April but this also means that its high season and higher rates at hotels and resorts.  The Caribbean destinations such as Bocas del Toro has a shorter dry season, usually September/October and February/March.  Humidity is always high in Panama and some areas in the Caribbean receive almost twice the yearly rainfall of Panama City.

It is most common to fly into Tocumen International Airport (PTY) which is 22 miles from the downtown area unless you can find a flight into Albrook Airport (PAC).  The only airports in the United States that fly direct into PTY are Atlanta, Houston, Miami and Newark.  Bocas del Toro Airport (BOC) is an hour flight from Panama City.

Bocas del Toro has tons of little hotels right near the water and nightlife.  Hotel Palma Royale is centrally located right across the street from the water taxis and restaurants.  Jimmy Buffett stayed here and the service is top notch.  We stayed at Hotel Olas because it is owned by a friend and the location is wonderful and the ocean patios are great.  It’s a good value if you’re looking to save some money! 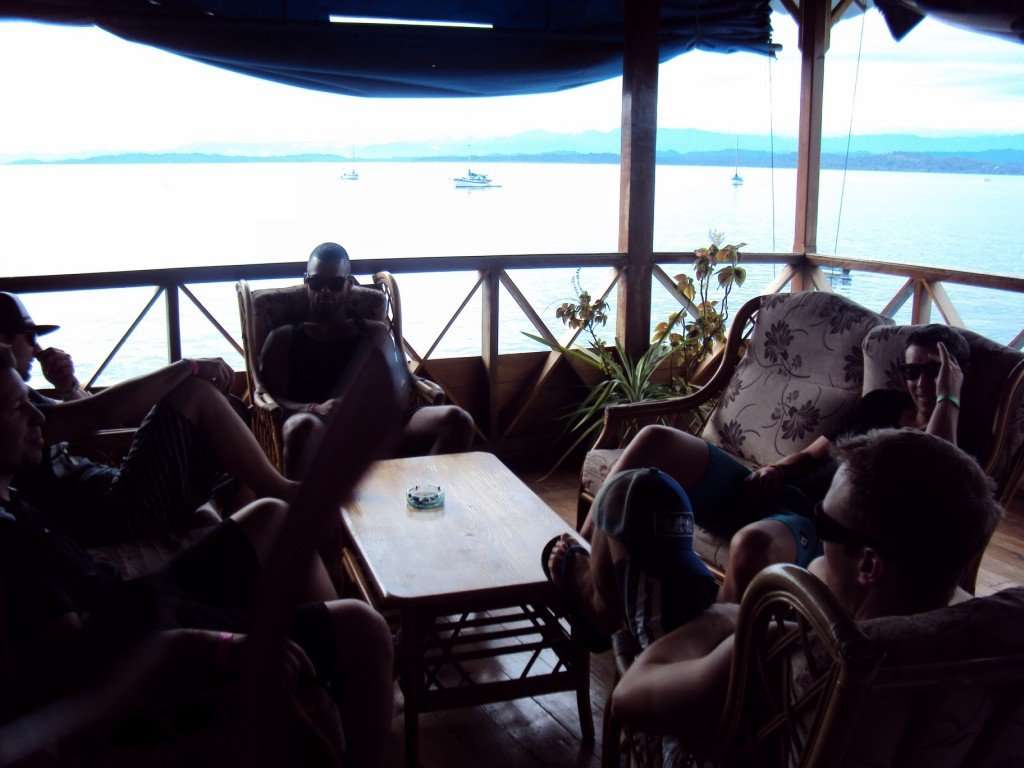 Our terrace at Hotel Olas

Take a city tour of Panama City and see the “three” Panama cities: the ruins of the 16th century original city Panama Viejo or “Old Panama”, the Spanish colonial city or Casco Viejo, and the modern city lined with skyscrapers.  Panama City was founded in 1519 and was the first city founded on the west coast of the Americas.  All of the loot stolen from the Inca empire went through Panama City, making it the target of English pirate Henry Morgan who destroyed it in 1671.  In 1673, a new colonial Panama City (Casco Viejo) was built which still stands as the historical center today.  Casca Viejo is now a vibrant neighborhood with renaissance-restored hotels, restaurants, sweeping ocean and bay views and is now Panama City’s hottest night life sector.  It was featured in the James Bond Quantum of Solace film! 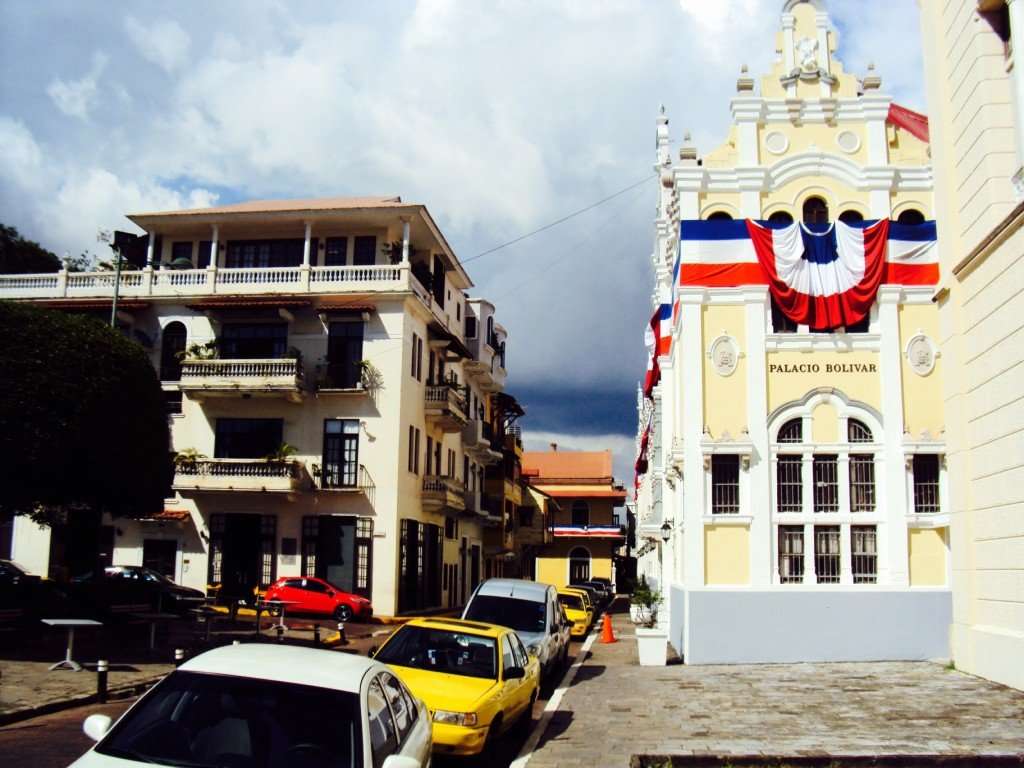 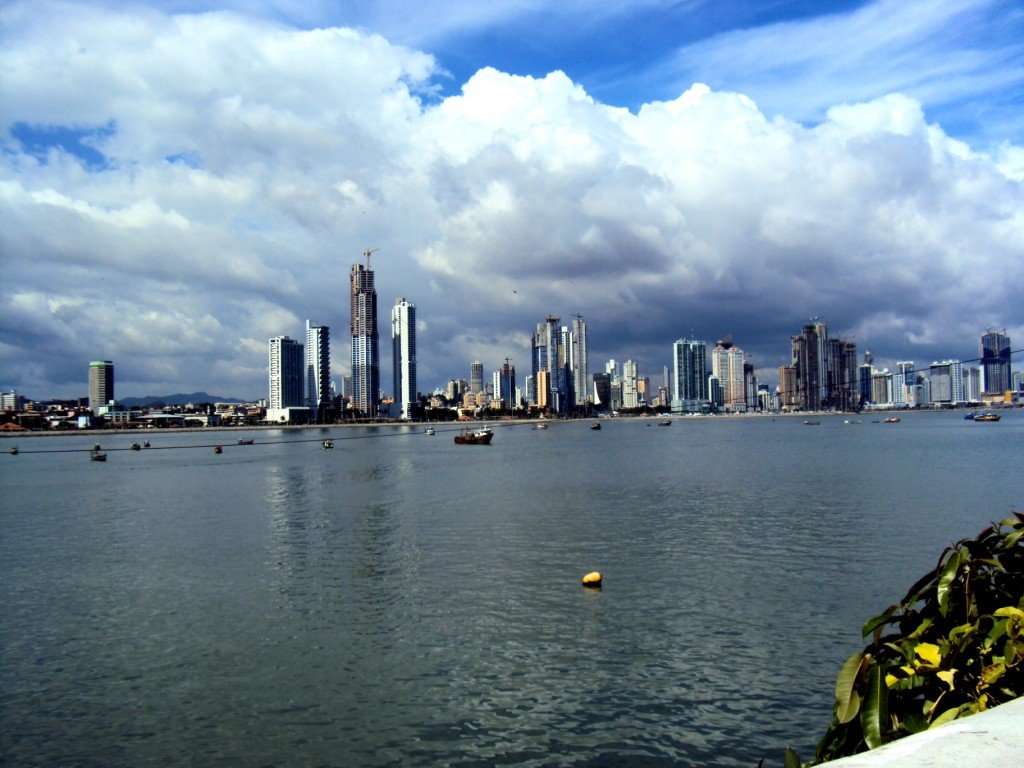 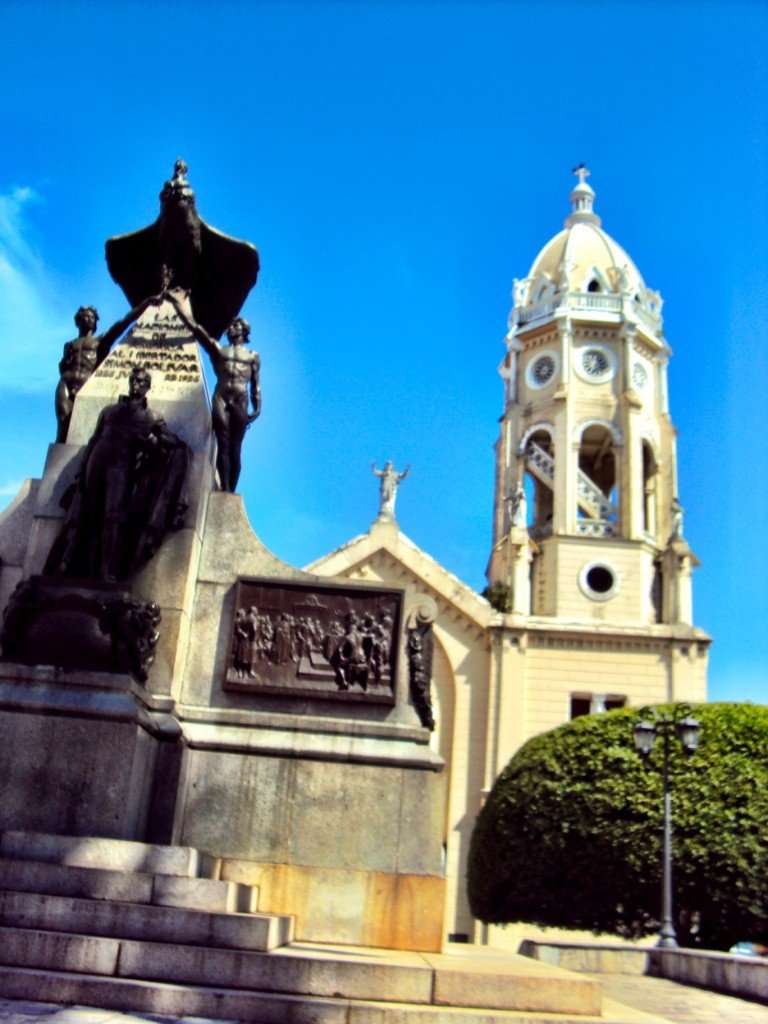 A city with a fascinating history

Visit the Panama Canal at the Miraflores Locks.  10 minutes from downtown Panama City and a $10 admission fee, the center features a museum with interactive exhibits and a short film on the building of the Canal.  You can get close-up view of ships transiting through the locks on the outside terrace. 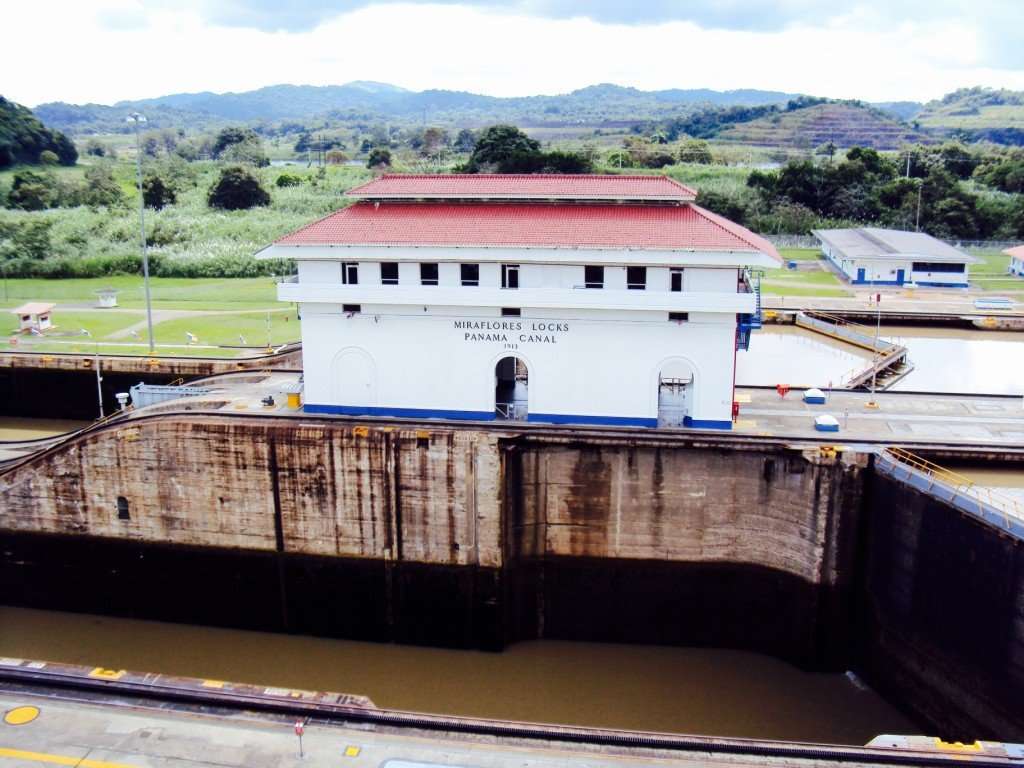 Panama Canal at the Miraflores Locks 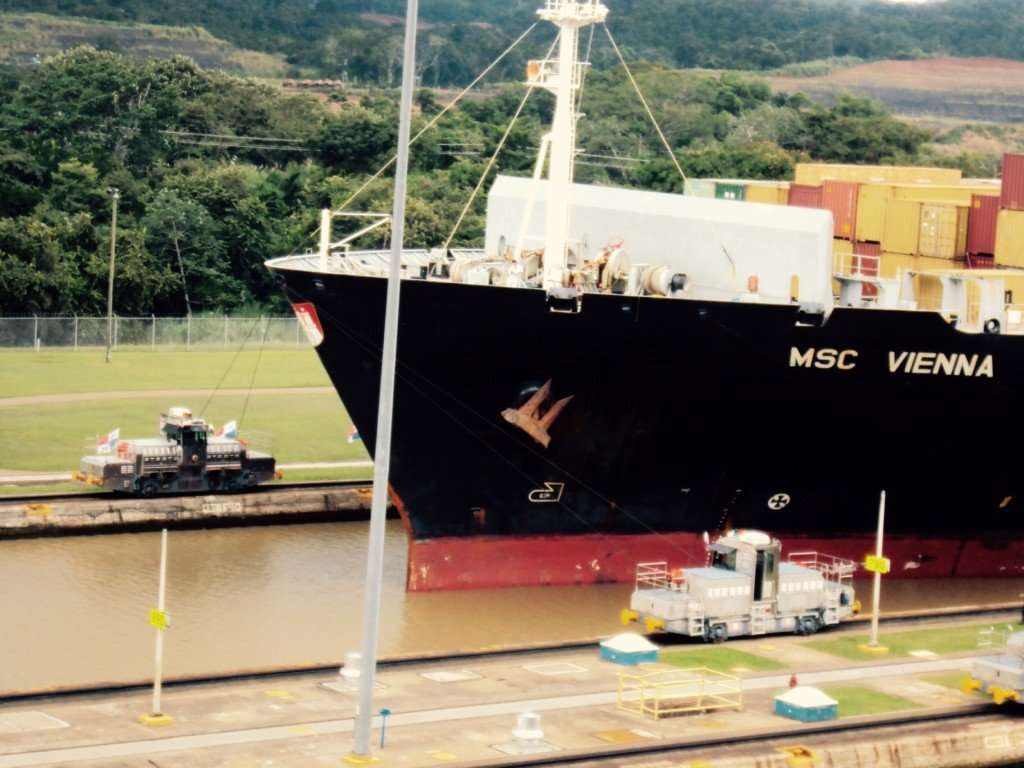 Ships passing through the canal

If you’re looking for fine dining at its best, make a dinner reservation at Madrigal in Casco Viejo.  The restaurant has two floors, each with its own intimate feel.  The owner and chef has Michelin Star and the food is both creative and upscale.  Try the tasting menu for the full experience!

If you’re a little more on a budget but want the freshest and tastiest seafood and schmooze with the locals, check out The Fish Market.  This is a restaurant but the kitchen is a food truck and they have a different menu every night.  Come early or they might run out of your first choice!

Get a taste of Panamanian nightlife which takes place in three sectors of the city: Casco Viejo, the business district and the Amador Causeway.  The bars, discos, pubs and casinos are packed all night until the early morning.  In Casco Viejo, check out the La Rana Dorada micro brewery, Tantalo Rooftop Bar and the Habana Panama salsa dance club.  The business district contains the Hard Rock Hotel that has 4 bars including the Float Pool Get Wet bar and stage for bands, The Wine Bar, and Sparkles Bar with sweeping view of the city and bay skyline.  The Amador Causeway connects a string of Panama Bay islands with ocean and city views both day and night and is home to Bamboo, a popular bar with an open-air area and indoor lounge and Pahya, a fairly new and popular dance club.

Take the 1 hour flight to the Bocas del Toro archipelago!  There’s so much to do and explore in Bocas and you truly feel like you’re in a different world here.  You can sail, horseback ride, dive, visit the Bastimentos caves and explore all the nearby beaches.  We hired a boat to take us to Red Frog Beach, one of the best beaches in Panama.  There wasn’t much of a restaurant or snack bar but apparently they were in the process of building one across the street when we were there! 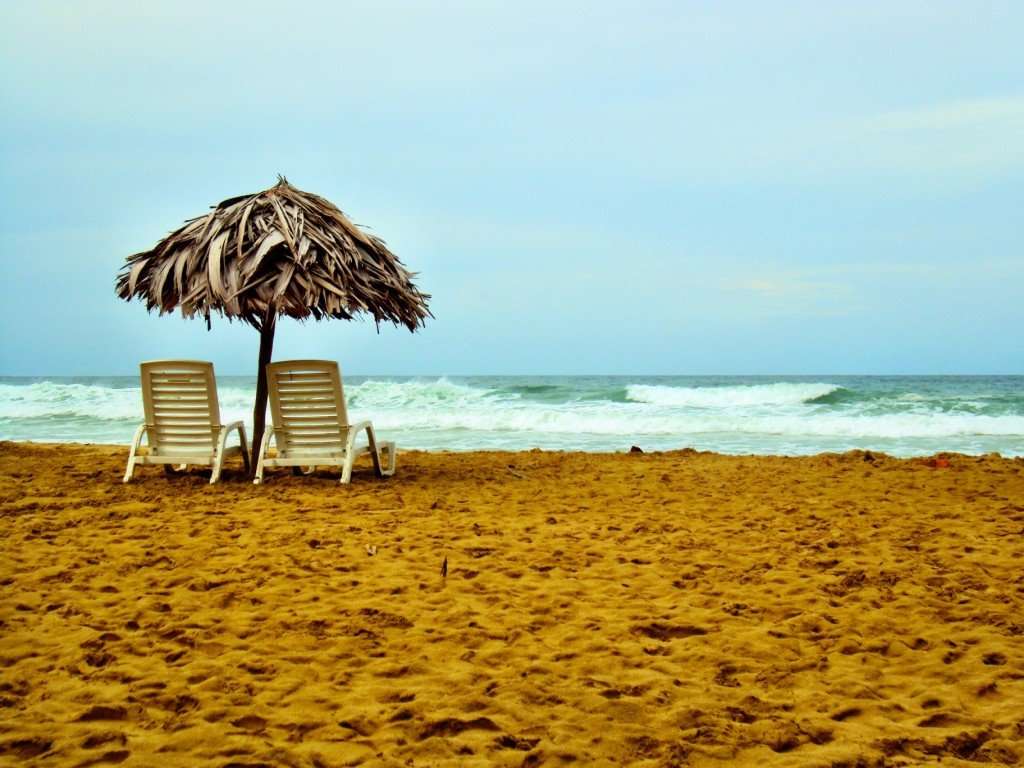 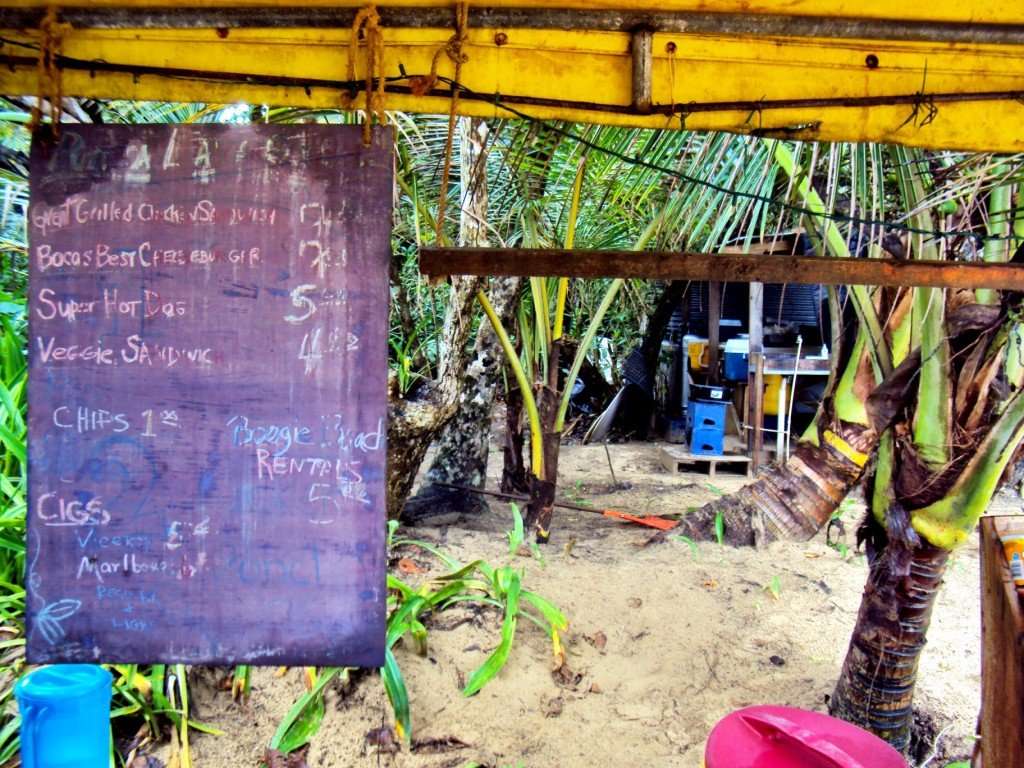 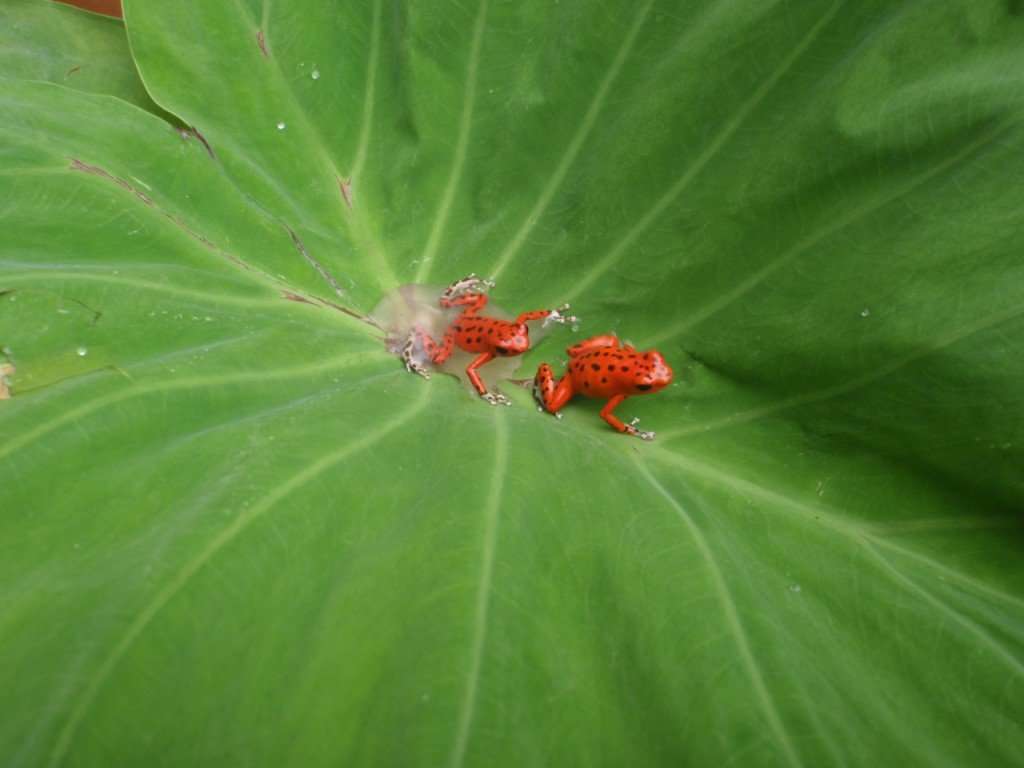 Bocas also has some of the best waves in Panama and is also one of the best places to learn how to suf.  Check out www.BocasSurfSchool.com if you’re interested in learning.  We hired a water taxi to take us to Silverbacks break and wait for us while we (tried) to catch some waves. 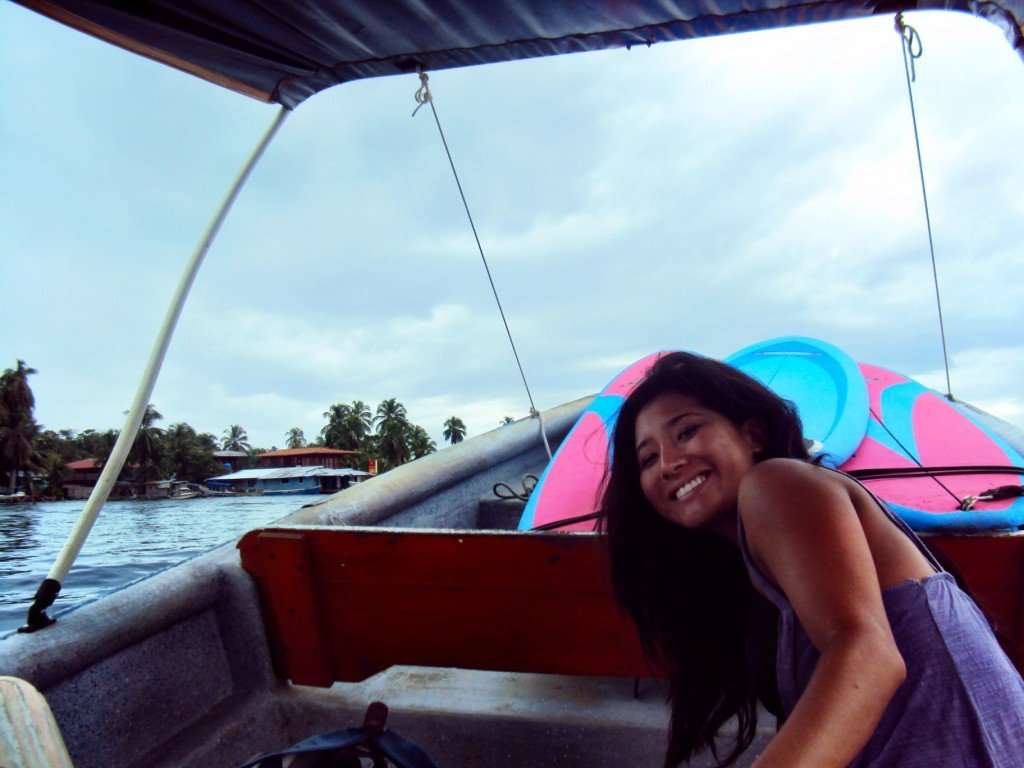 Out to Silverbacks break 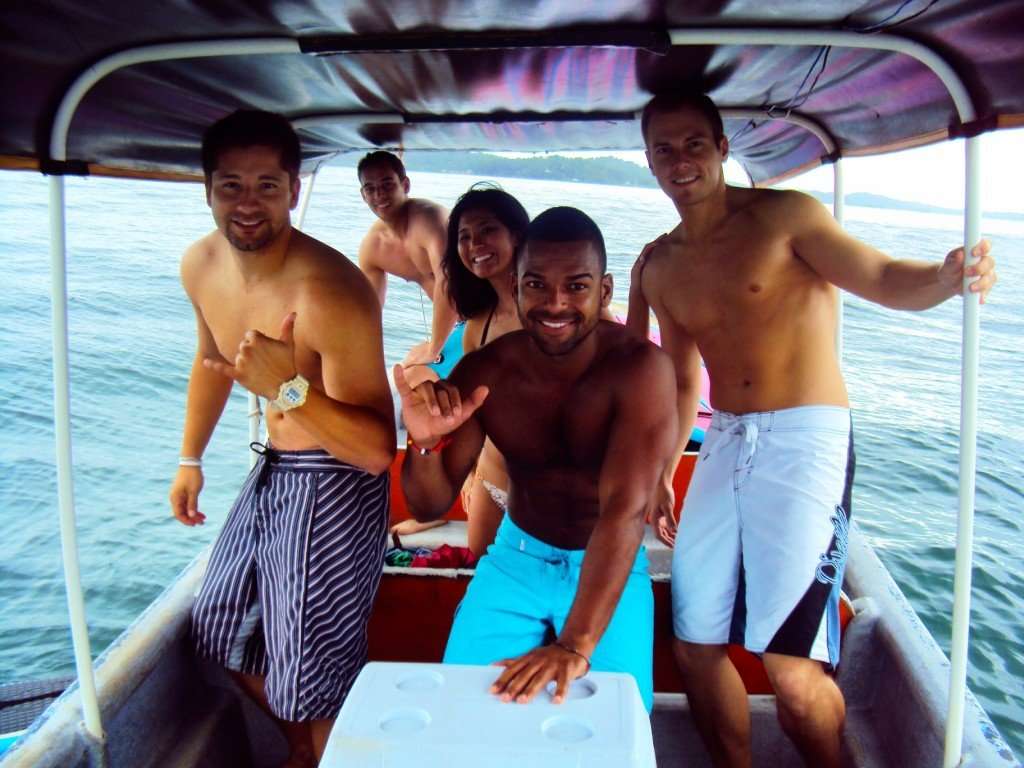 After undoubtedly working up an appetite, have dinner at El Ultimo Refugio (the Ultimate Refuge) and enjoy fresh seafood and delicious cocktails with sunset views over the water.  The restaurant is 100 meters right after you pass the ferry dock and Casa Verde.  The food is delicious and the service is stellar!

Bocas del Toro is known for cheap drinks and music that plays all night!  Start at Bar La Iguana, a surf shop themed bar across from the popular sushi restaurant The Blowfish with great cocktails.  It typically opens around 7pm until midnight and it’s a great place to meet fellow travelers as well as locals.

After you’ve had a few cocktails, head over to Barco Hundito (the Sunken Ship Bar), the most popular spot at night in Bocas.  It opens around 8pm and closes at midnight Sunday through Wednesday and at 3am Thursday through Saturday with a $2 cover charge for guys.  The bar lives up to its name and there is an actual shipwreck in the middle of the bar with a dock built around it.  Dance the night away on top of a sunken boat to anything from hip hop to reggae with both tourists and locals!

Hire a boat and explore the surrounding islands.  We had a friend take us on his boat to Starfish Beach, where the stars shine in the sun.  You can also take a taxi from town which takes approximately 25 minutes or the Bocas del Drago bus that stops at the plaza in downton Bocas and takes you on a beautiful ride through the jungle to Bocas del Drago.  Once in Bocas del Drago, take a five minute boat ride to the beach or forge the 20 minute walk between the shore and the jungle. 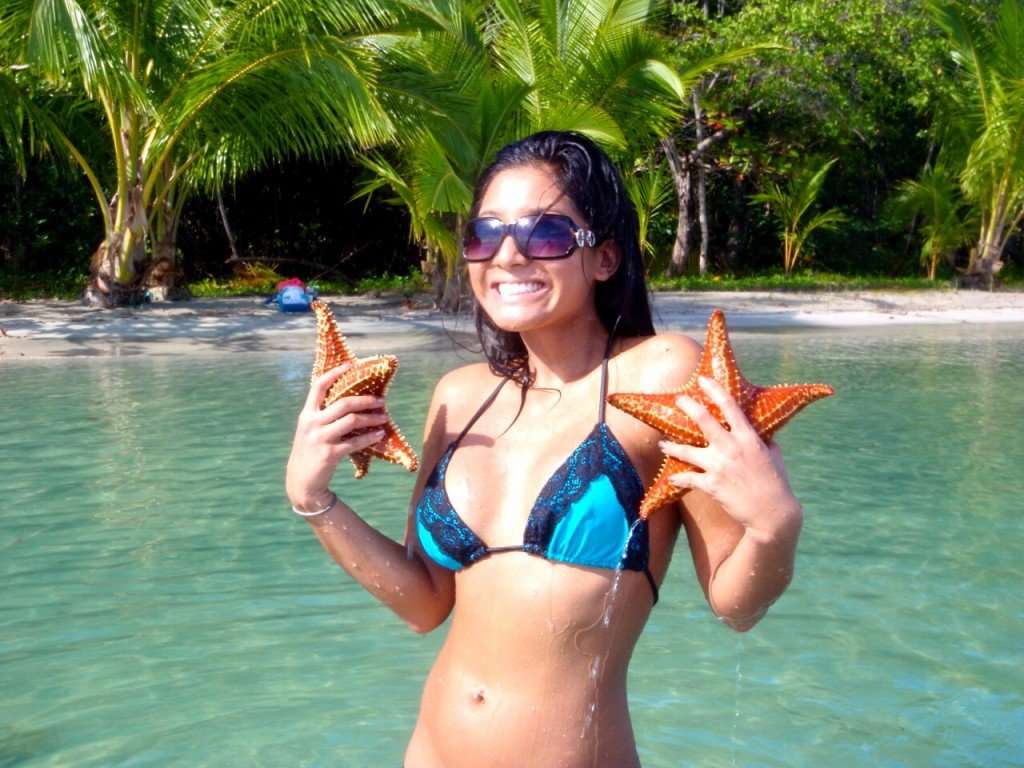 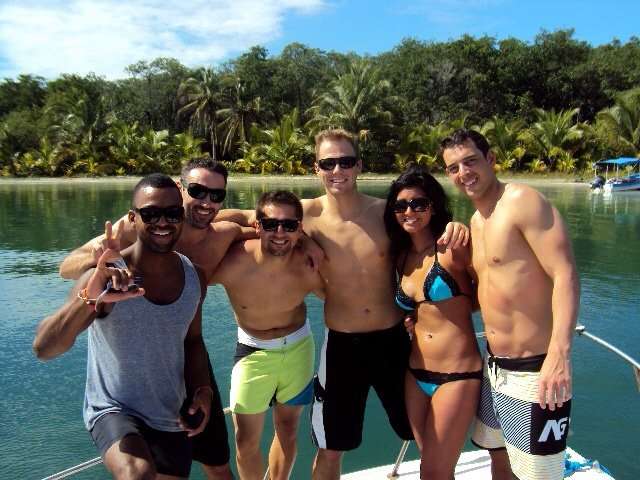 The crew at Starfish

We were pleasantly surprised to find this magical beach relatively deserted.  We spent the afternoon swimming in the cystal clear water displaying hundreds of bright orange starfish and louning on the white sandy beaches.  The water is always calm and clear which makes it ideal for snorkeling (or spearfishing like we attempted…but I wouldn’t recommend it)! 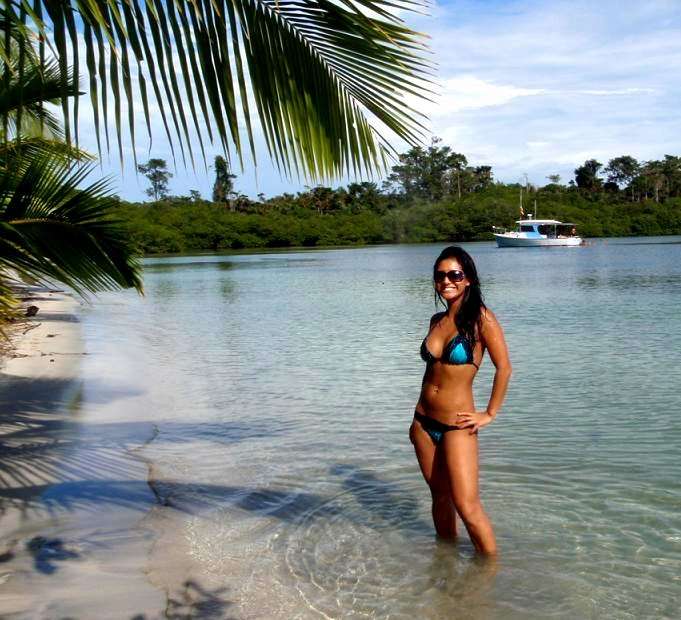 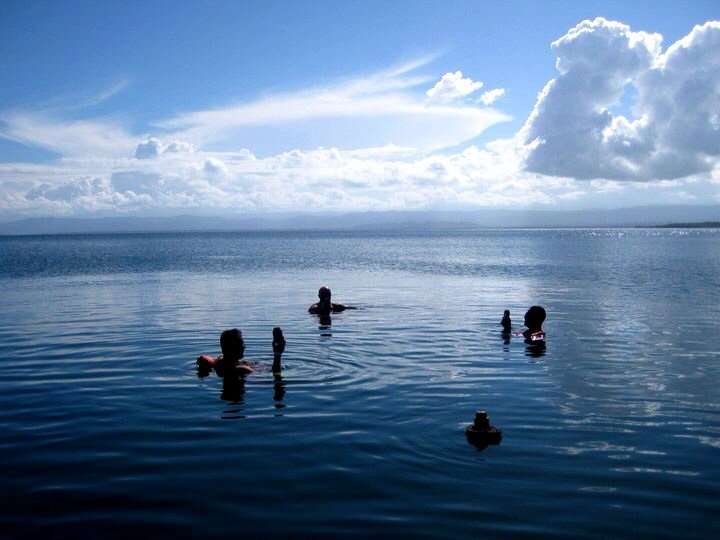 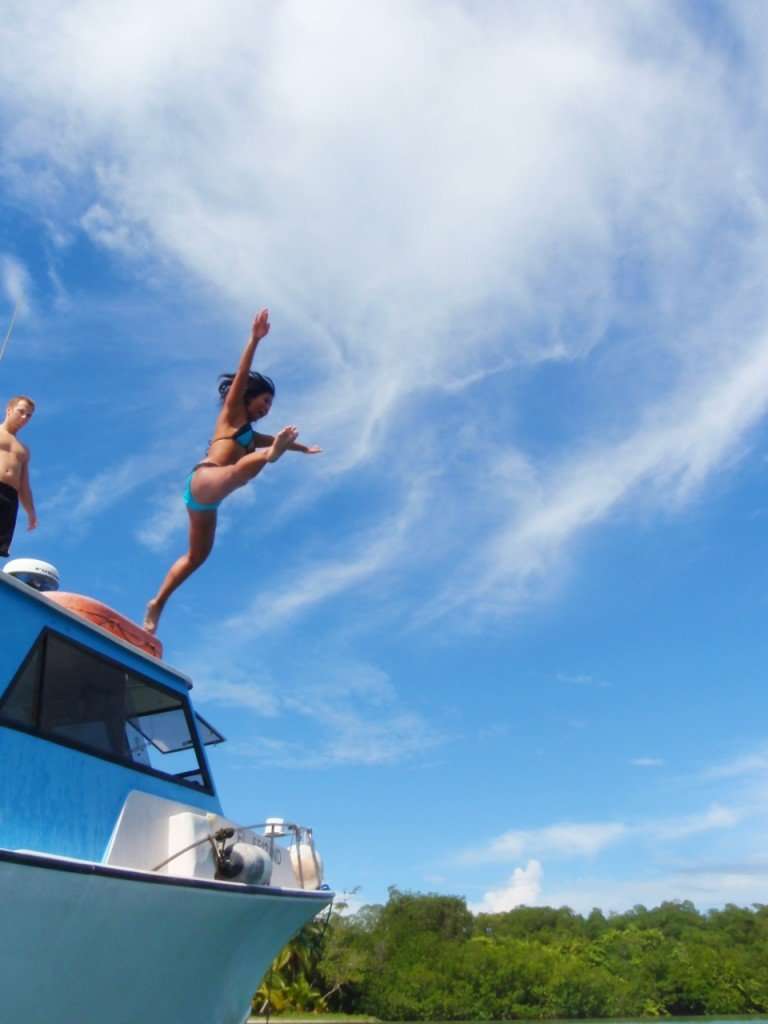 Fun off the boat!

Don’t leave Bocas without getting tacos from Tacos Surf Bocas.  Founded in 2014 by a San Diego couple, Taco Surf Brothers serves the freshest baja fish tacos, California burritos, specialty fries, homemade hot sauces and more.  You can get 3 tacos and a beer for only $10!