Hvar is the longest and sunniest Croatian island, and arguably one of the most beautiful and glamorous islands in the world with its lavender fields, hillside vineyards, medieval stone and swanky nightclubs.  The small bay town of Hvar is set against the beautiful Adriatic Sea with 13th-century walls surrounding beautiful Gothic palaces and marble streets.  Visitors love to wander the winding stone streets and explore the beaches by day and party here until the sun comes up! 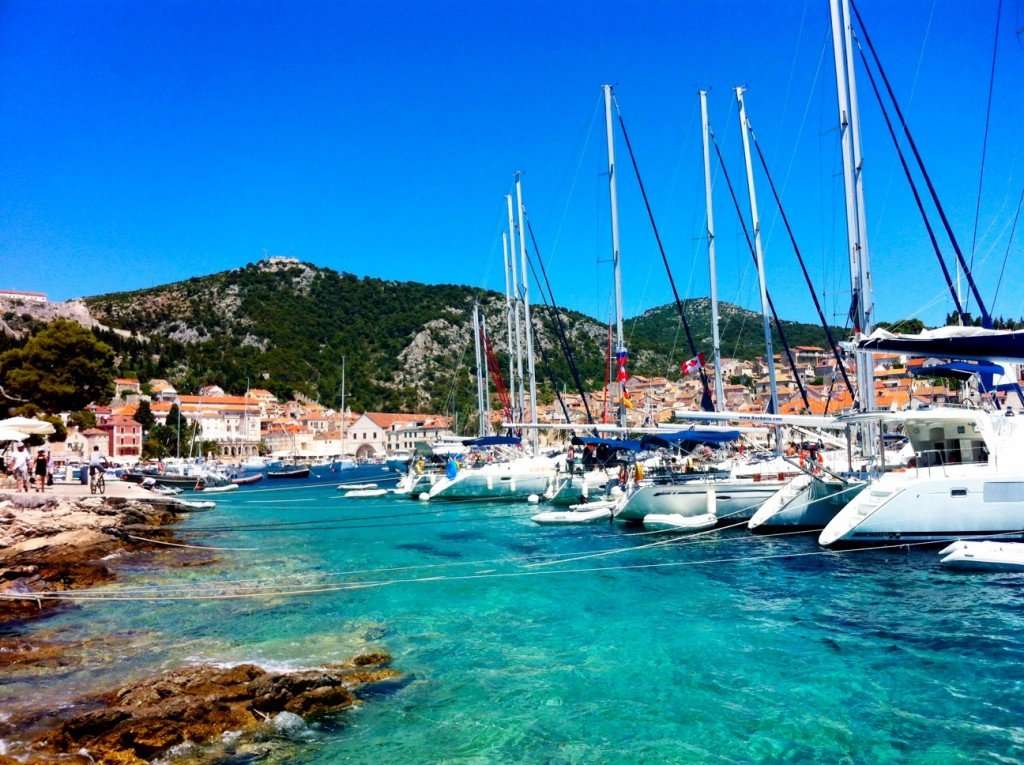 Croatia’s climate is Mediterranean on the coast with warm summers and mild winters and continental inland with slightly hotter summers and extremely cold winters.  July and August is peak season with the beaches packed with tourists and locals fleeing to the coast.  You’ll still get the nice weather but a fraction of the crowds and prices…Hvar Town is estimated to draw around 20,000 people a day in the high season! 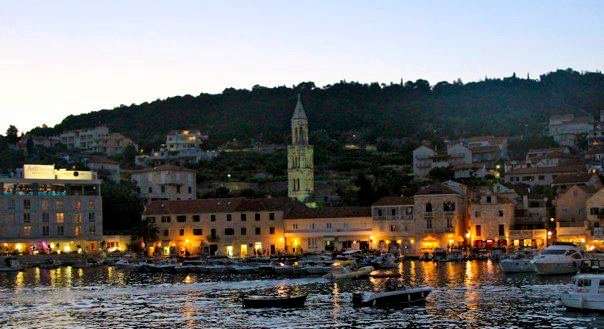 The easiest way to get to Hvar is to fly into Split airport (Croatia Airlines and EasyJet fly into Split) and take a high speed catamaran to Hvar Town.  There is a local bus (#37) that runs every 20 minutes from the airport to the ferry or you can take a taxi.  Hvar has four ferry ports: Hvar Town, Jelsa, Sucuraj and Star Grad.  There are two companies, Jadrolinija and the Krilo company that offer fast catamaran sailings between Split and Hvar Town.  The trip takes approximately an hour and it leaves from the first pier closest to the harbor waterfront promenade (less than a 5 minute walk from where you purchase tickets…buy your tickets ahead of time as they tend to sell out)!  You can buy tickets at the kiosks at the Croatia Airport bus stop, in front of the Ferry Terminal and inside the Ferry Terminal itself.  Look for the blue Jadrolinija signs.  You can check the ferry schedule here.  It is also possible to fly into Dubrovnik but the airport is 100km to the Drvenik ferry station.  If you’re one of the lucky ones, you can charter a yacht and sail from Split directly to Hvar 🙂 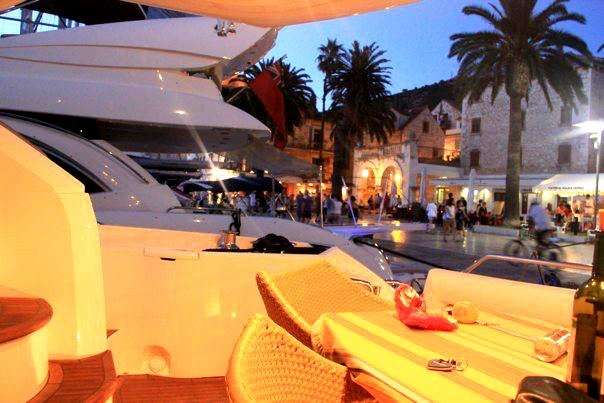 Our spot docked right in the heart of town

Villa Nora Hvar is a new hotel situated in the heart of middle of Hvar old town, about a minute walk from the main square.  Housed in a former palace from the 14th century, the hotel is near the beach and within walking distance of restaurants, shops and nightclubs.  The owner’s daughter, Natalia, is beyond hospitable and attends to your every need!

Hotel Park Hvar is located in the center of town and overlooks the harbor with sea view suites and a leafy terrace restaurant, Central Park Club, that serves breakfast with a view by day and turns into the town’s hot spot at night with live music and a lively bar scene!

Adriana Hvar Spa Hotel is located beside the throbbing Carpe Diem nightclub and is one of the best hotels on the island (and pricey).  For the best views in town of the ocean, request suites 306 and 314.  The hotel has a spa, salon, 25-metre infinity pool, large balconies, and a vivacious glass-fronted bar with wrap-around views of the harbor. 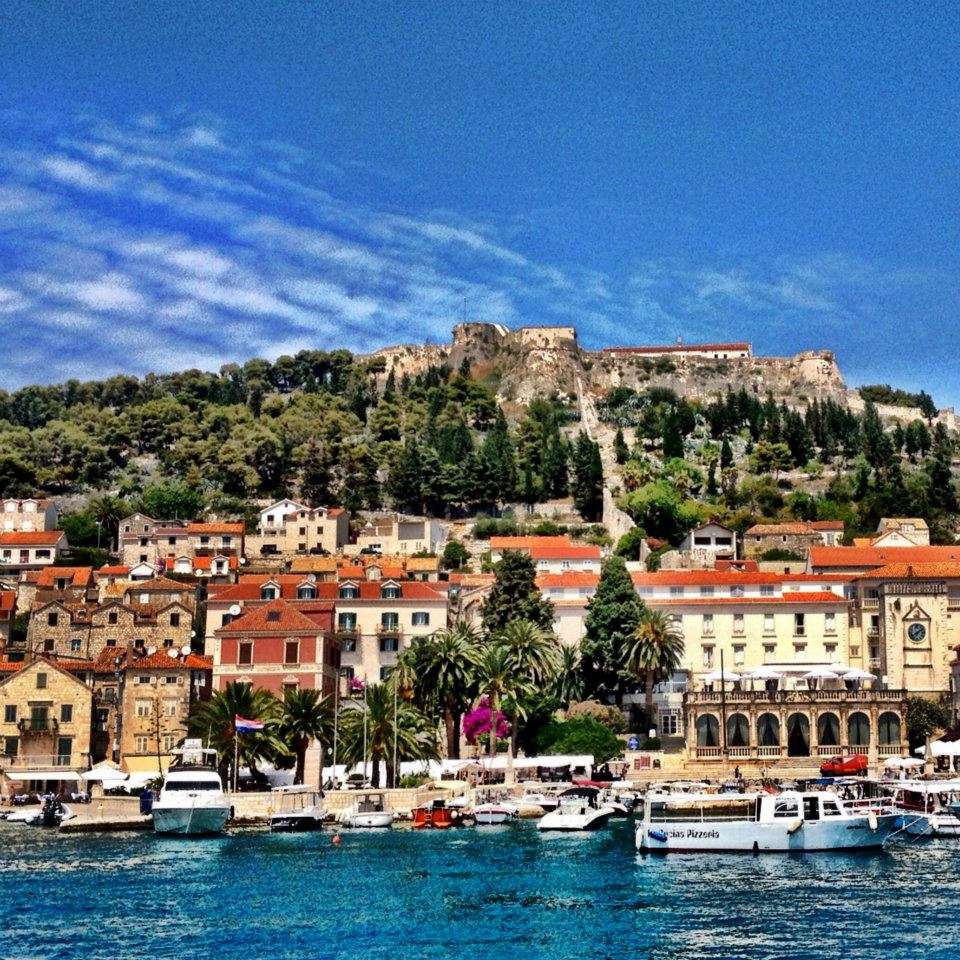 The view pulling into Hvar

Head straight to Hula Hula Beach Bar, the best spot to watch the sunset with house music playing in the background and a sundowner cocktail in your hand.  Hula Hula is just a short walk along the forested promenade just past the Amfora Palace Hotel and the place to be as the sun goes down.  You can also order food from the bar’s adjoining sister bistro Bubba Gump.  Wolf, the owner, has lived all over the world and has brought his own concepts to Hvar to create one of the top 10 world’s best beach bars.  Hula-Hula is known for its après-beach party from 4 pm to 9 pm.  Make sure to be there by 6pm to catch the breathtaking sunset over the Adriatic and the best DJs every day at the world’s best sunset party!

Hvar’s best restaurants lie in the narrow streets between the castle and the main square.  Order the famous spageti sa jastogom (lobster with spaghetti) at Macondo, a standing favorite Hvar restaurant located down a cobbled alley from the main square known for its fresh seafood and old-fashioned atmosphere that echoes its ancient Groda neighborhood.  The restaurant has a fireplace and a few tables outdoors.  Make a reservation for a table outside to people watch while you enjoy your meal.

If you’re up for a little adventure, take a 15 minute taxi-boat to Zori, an exquisite restaurant on the nearby island of Palmizana with a beautiful outdoor terrace that overlooks a truly gorgeous and secluded bay.  The fact that you can only get to this restaurant by boat adds to its charm.  The location is simply stunning and the food is lovely!

End the night with a drink at the rooftop bar at the Adriana hotel with a wrap-around view of the city, harbor and islands or move to live music at Central Park Club at the Hotel Park Hvar! 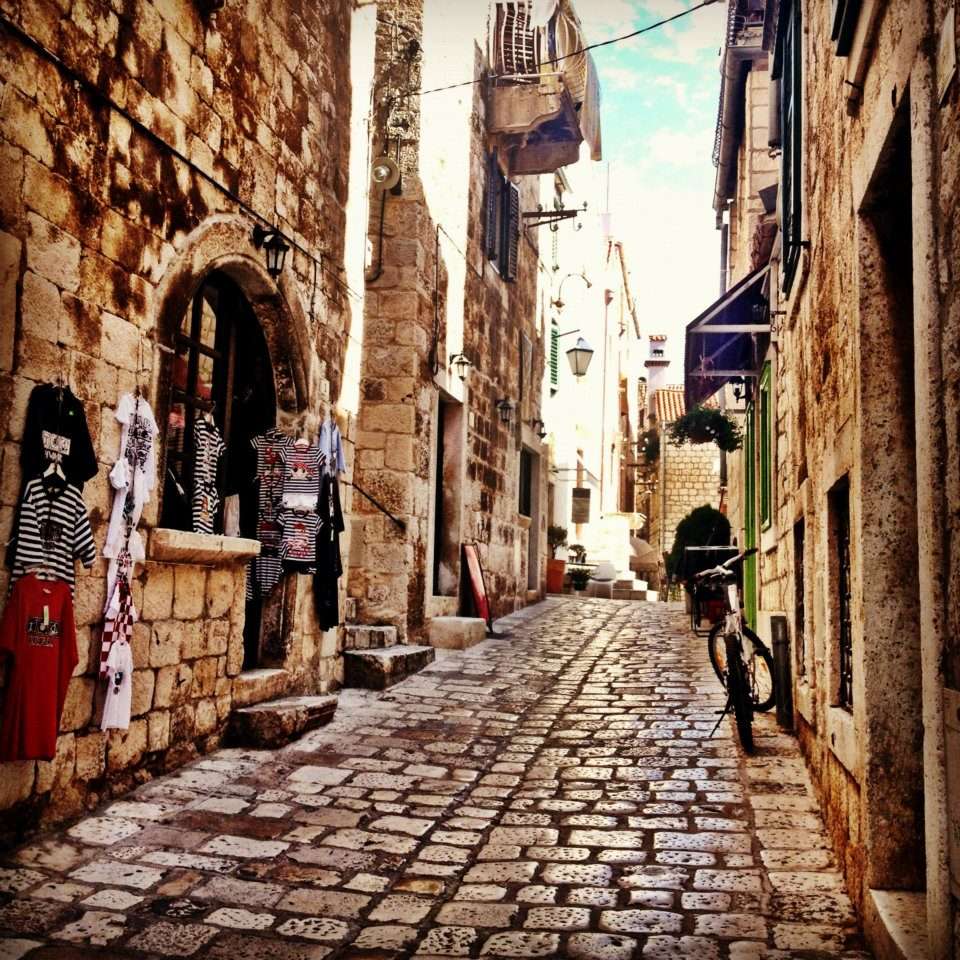 Wander around St. Stephen’s Square, one of the largest old squares in Dalmatia and the center of town.  Marvel at the Cathedral of St. Stephen that forms a stunning backdrop to the square whose bell tower rises four levels.  The square is rimmed with trendy open-are cafes and the labyrinth of narrow stone alleys is filled with chic eateries and shops.  Walk north from the square, passing the main city gate and ascend the stairs through the old part of the city and through the network of tiny streets through a park to the Fortica Španjola built on the site of a medieval castle that defended Hvar from the Turks.  The fortress was built at the beginning of the 16th century and was reconstructed in 1579.  Today it holds a collection of antiques from the Middle Ages.  It’s a nice walk up to the fort and you’ll be able to experience an unforgettable panoramic view of the city of Hvar and the Pakleni islands. 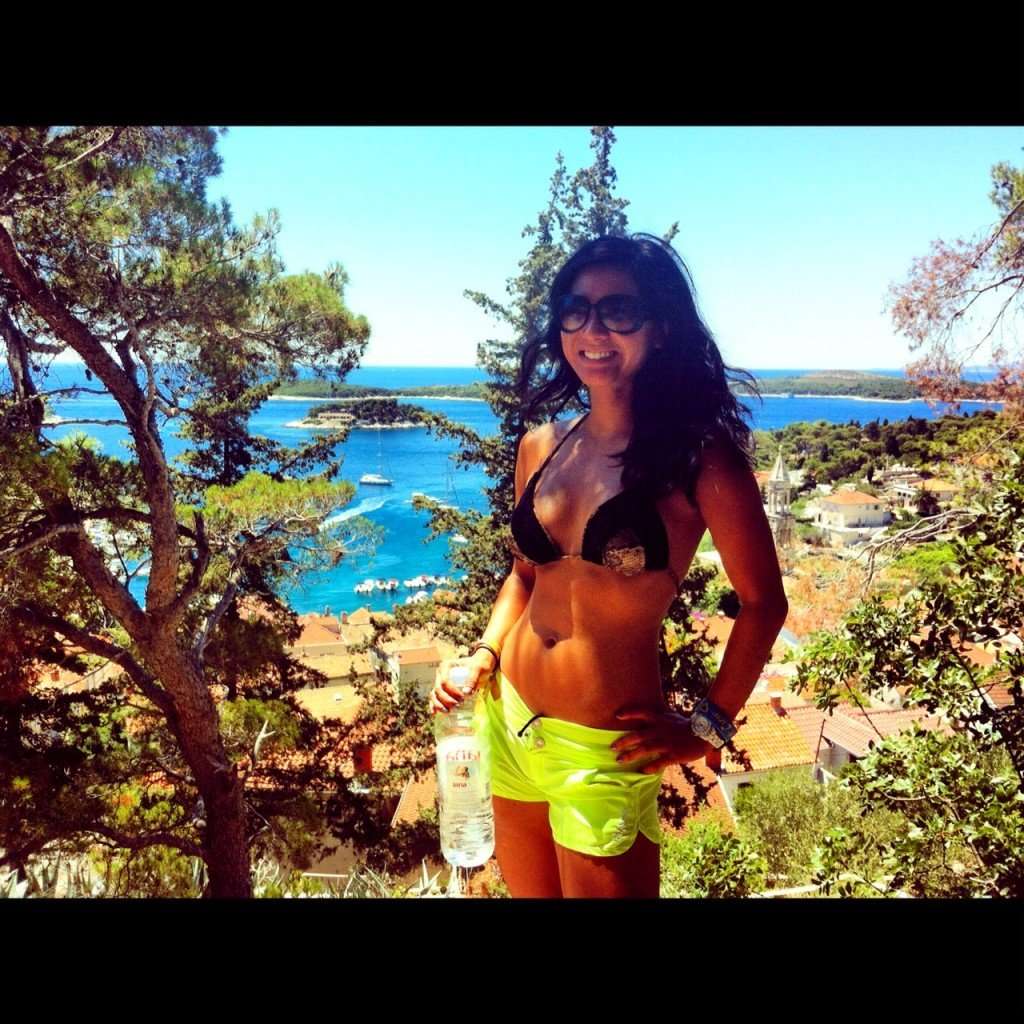 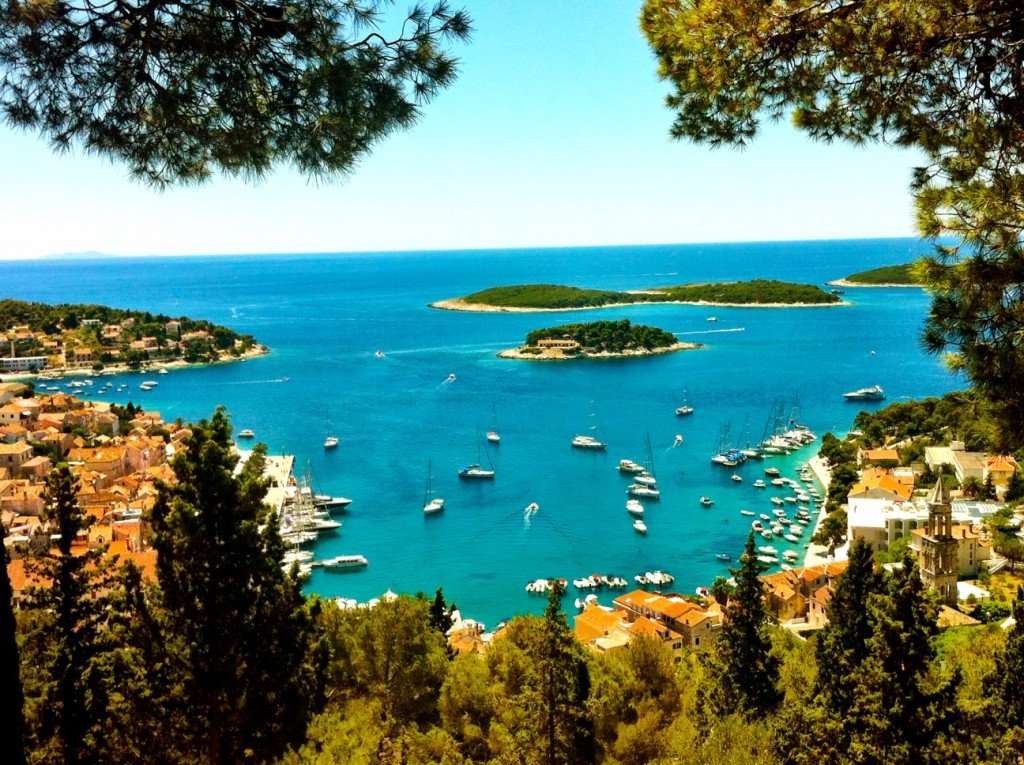 The view from the fortress

Head  to Bonj ‘les Bains’ beach club, a 1930s white stone colonnade to sunbathe where you can rent sunbeds and parasols, private stone cabanas and even a wooden pontoon for up to six people.  Lounge all day in ultimate luxury, sunbathe and take a dip in the sparkling Adriatic sea!

Dine at Restaurant Divino, located on the Riva in the heart of the city with a breathtaking
view of the Pakleni islands, which boasts the best location and wine list on the island.  Enjoy the homemade seafood ravioli and exquisite desserts created from Michelin star chef Tea Mamut.  The view from the terrace cannot be beat!

Grab drinks at Carpe Diem Bar then take a taxi-boat to its legendary sister club Carpe Diem Beach, the trendiest club on the nearby island of Stipanska.  During the day the club is a lounge where you can sunbathe and sip on cocktails and hands down the #1 hot spot by night.  Carpe Diem Beach has two fine pebble beaches, a scuba diving club, beach volleyball, a restaurant, lounge, pool, open-air massage pavilion and dance floor so you can dance the night away under the trees until the early morning!  Both are open only in the summer months.  Big DJs from all over the world pack Carpe Diem Beach (open 10 am until 5:50 am). 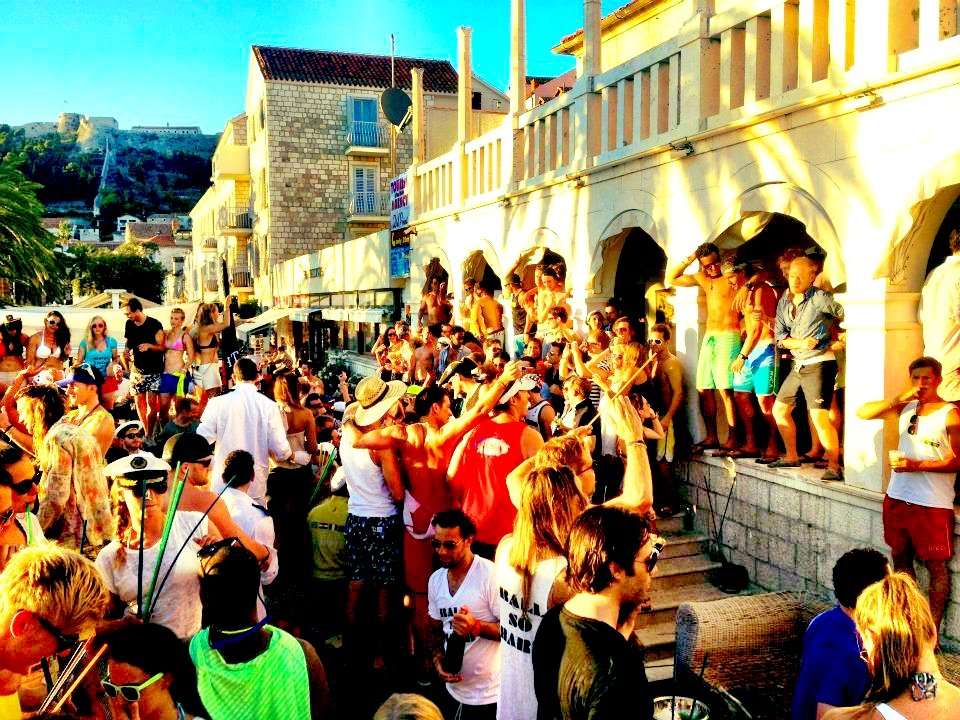 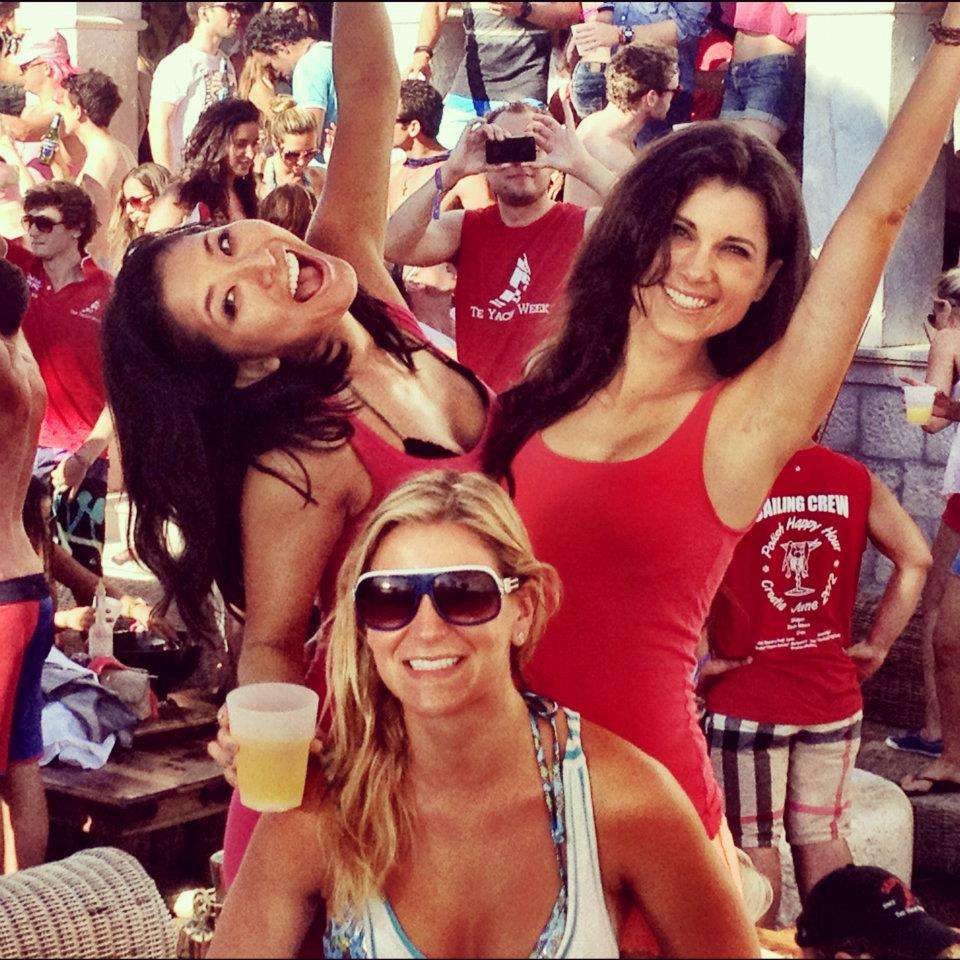 Hire a boat and hop the Pakleni Islands, a gorgeous chain of 21 wooded islets with crystal clear waters, hidden beaches and deserted lagoons.  These fabulous islands represent natural beauty at its finest with clear lagoons for swimming and amazing fresh seafood restaurants.  You can hire a boat easily from the Hvar pier for approximately 10 euros.  Explore Dubovica, a cozy beautiful beach 8km east of Hvar town. 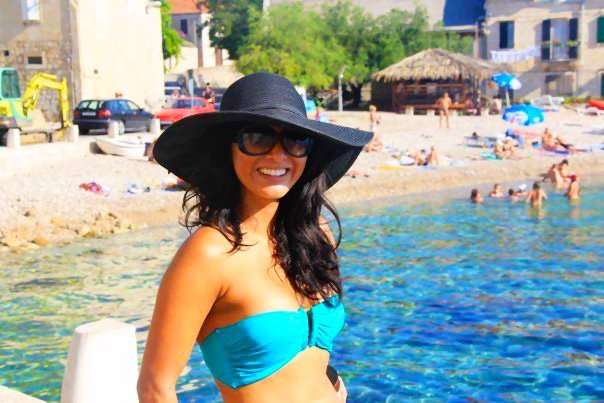 Exploring the beaches of Hvar 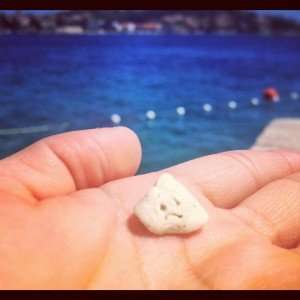 We found this little guy on our beach day…he should be happy!

Venture on the 2km walk from the town center to Falko, an adorable hideaway in a pine forest just above the beach.  Have lunch at Falko Beach Bar, only a 15-minute walk along the stunning seafront from Hvar town yet you feel as if you’re a world away.  Relax in one of the hammocks in the sea breeze before making your way back to town! 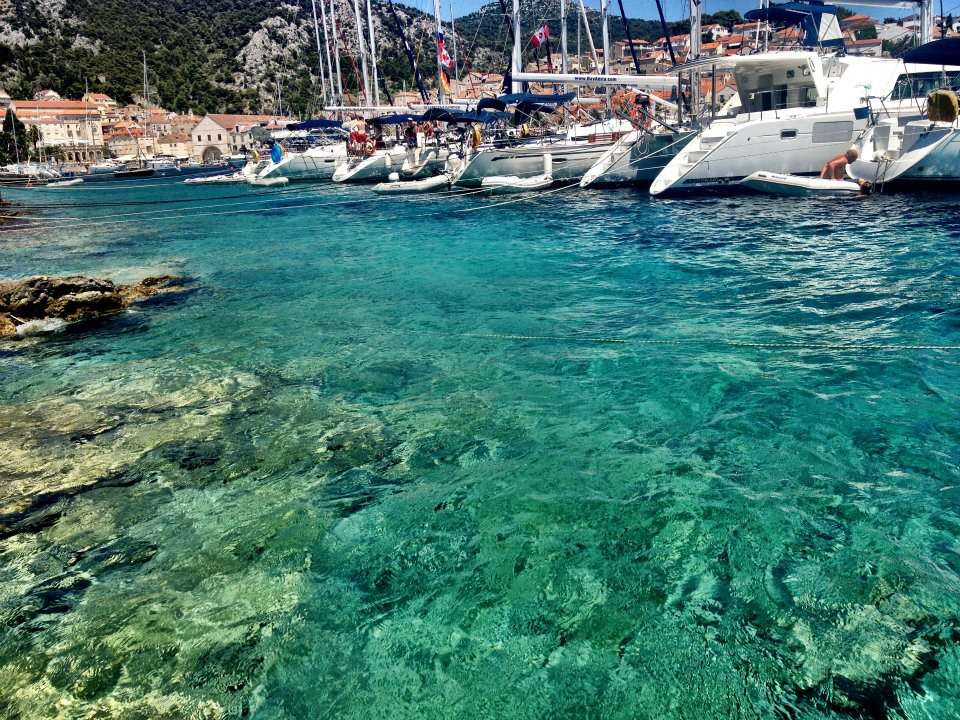