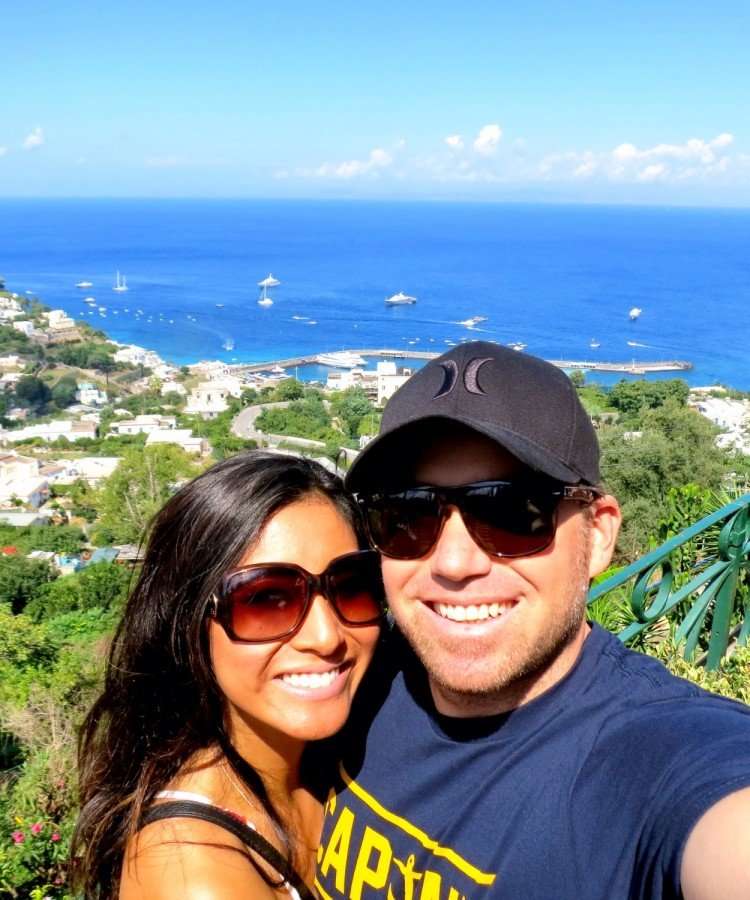 Capri is an island in the Bay of Naples, close to Sorrento and the Amalfi Coast, that has always been synonymous with beauty, stars, style and impossible glamour.  The island is comprised of three main areas: Marina Grande, Capri and Anacapri.  The Marina Grande is the main port of the island with easy access to the hydrofoils and near the funicular railway.  The town of Capri is the island’s main population center with its designer shops, nightclubs and the famous Piazzetta.  Anacapri is situated high up on the slopes of Mount Solaro and is much quieter (and less crowded) than Capri.

April, May, September and October are the best months to visit Capri due to the gorgeous weather (warm enough to swim but not unbearably hot) and significantly lower hotel rates.  The summer months of June through August are the busiest of the year.  August registers the greatest number of tourists on the island, with an average of 20,000 arrivals per day to the 10 square km island…avoid August at all costs.

Arrive at Capri by sea!  There are daily ferries from Naples and Sorrento to the island and additional ferries departing from Positano, Salerno and Ischia during the summer months.  If you are arriving from Rome, be prepared that the journey will take you approximately 3 hours.  Take the Leonardo Express from Rome’s Fiumicino airport to the city’s main “Termini” railway station then take the Eurostar Frecccia Rossa (TAV) train to Naples.  This is the fastest and most expensive train with tickets costing 40 euros each for the one hour journey from Rome to Naples.  Tickets for the intercity train are 20 euros but the trip takes two hours.  Once at Naples’ main Piazza Garibaldi railway station, your best option is to take a taxi to the port of Molo Beverello for a fixed rate of 10 euros.  The high speed ferries depart from Molo Beverello with single tickets costing 18 euros (40 minutes).  The slow ferries depart from Calata di Massa and single tickets cost 13 euros (80 minutes).

In my opinion, the hotel Relais Maresca has the perfect sea front location 50 meters from the port with 27 elegant rooms and fantastic views across Marina Grande with Mount Vesuvius in the distance.  It has an unbelievable terrace overlooking the marina where they serve complimentary breakfast every morning and exquisitely refined Mediterranean cuisine for lunch and dinner.  There are also chaise lounges set up on the terrace for sunning and relaxing.  The hotel offers a bathing area situated in a small bay of Marina Grande from early May to late September.  The hotel is steps away from the marina where the hydrofoils arrive so you don’t have to travel far or deal with hauling your luggage up to town! 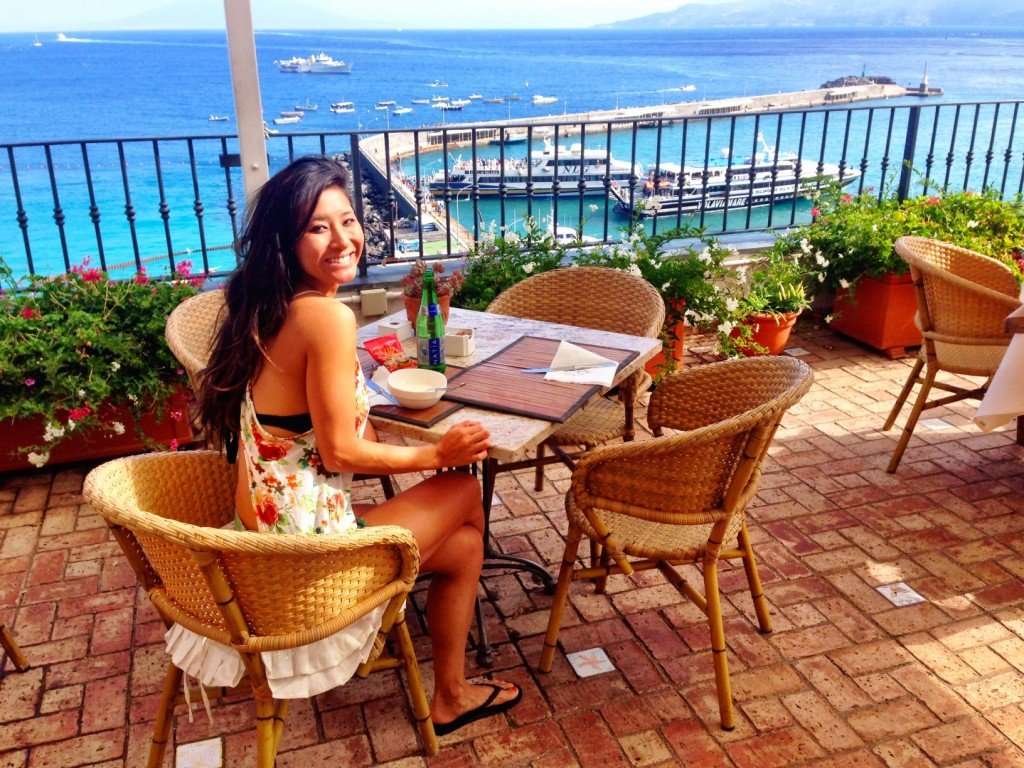 Complimentary breakfast on the rooftop terrace at the hotel Relais Maresca

Settle in and buy a round trip ticket for the funicular train to take you through the island’s lemon gardens and up to the buzzing Piazzetta, the heart of Capri.  The funicular railway is by far the quickest way to travel to the center of Capri from the port.   The 3 minute trip departs every 15 minutes and is closed from January through March for maintenance (substituted by bus service).  The ticket office is located to the right of the arrival dock and the cost is 1,80 € for a single ticket. 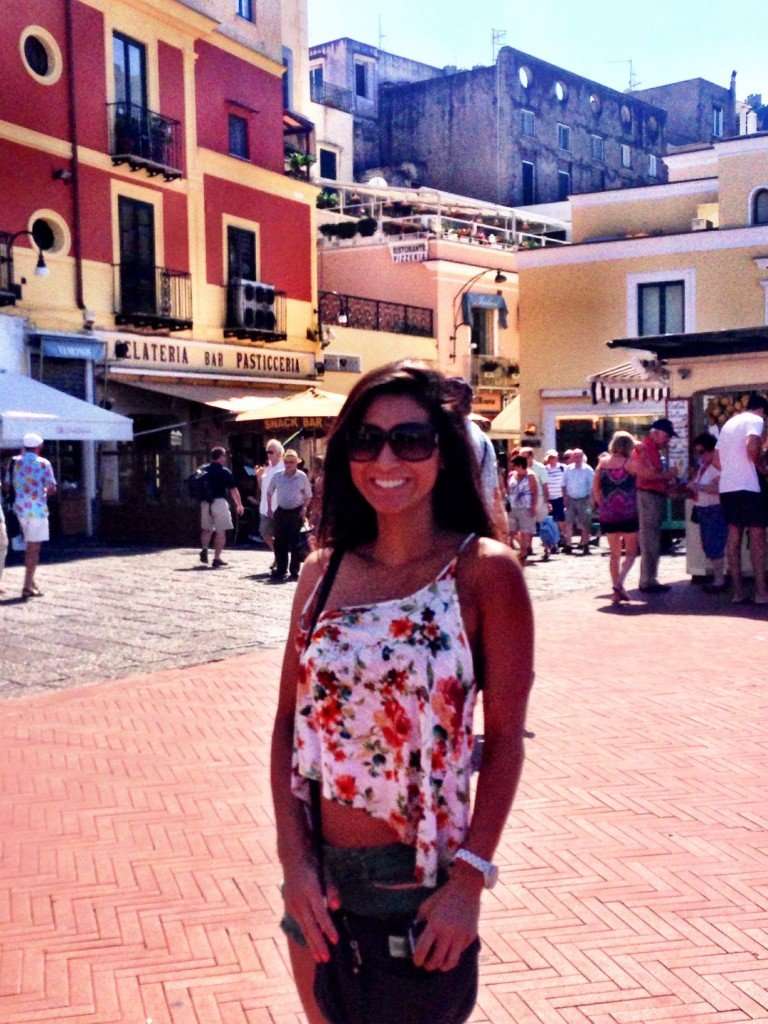 In the heart of the Piazzetta

Once you reach the Piazzetta, relax with gelato or coffee while you gaze at the sea and the boats.  The Piazzetta is a tiny square but always bustling with every seat of the four bars (all open until 2am or so) packed to the rafters.  Stroll down Via Camerelle and browse its famous luxury shops and designer fashion boutiques.  Continue along Via Tragara until you reach the breathtaking Punta Tragara Belvedere overlook facing the Faraglioni rock formations, Capri’s famous three towering rock formations that jut out of from the Mediterranean just off the island’s coast.  The best view of these stacks is actually from the sea and you will have the opportunity to see this on your boat tour tomorrow.  Have a drink at La Pergola bar at the Hotel Punta Tragara and enjoy the beautiful panoramic views.

For a dip in the sea set against the Faraglioni, take the footpath from the Tragara scenic overlook to the two beaches on the island shore directly opposite the sea stacks: La Fontelina and da Luigi.  Afterwards, there is a ferry service that will take you back to Marina Piccola.  If you prefer to head back to town, retrace your steps back along Via Tragara but instead of continuing on Via Camerelle, take the road uphill on the right (Via Padre Reginaldo Giuliano) until you come out on Via Fuorlovaldo and Via Le Botteghe.  Take the funicular train back down to the marina and get ready for dinner! 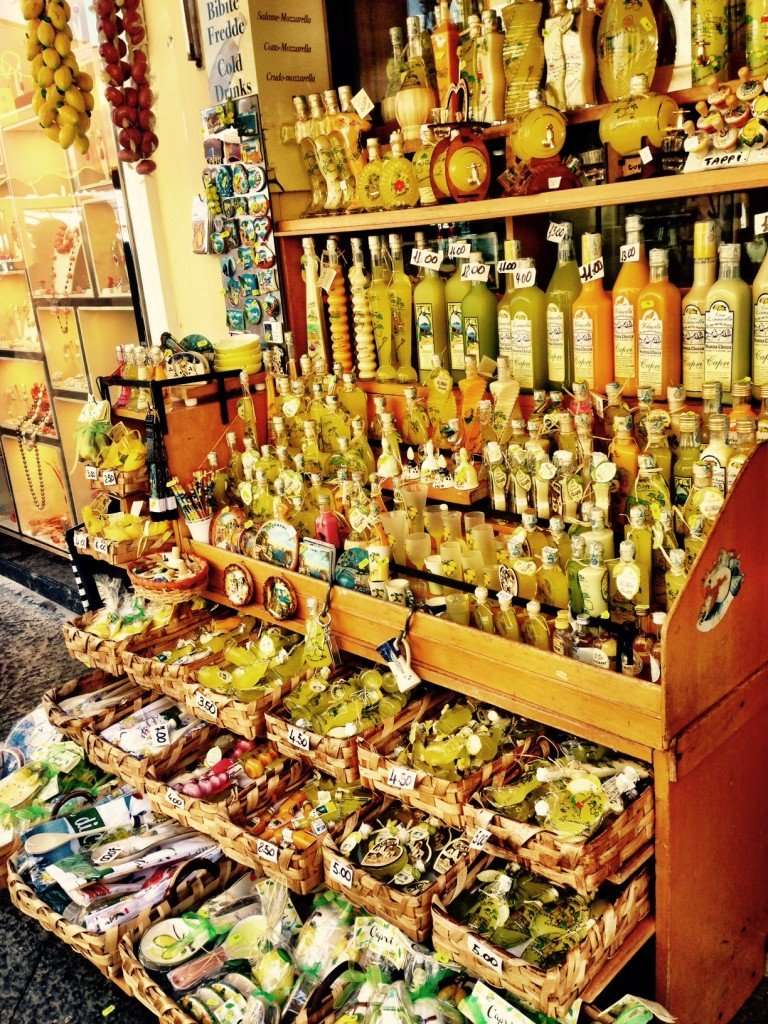 Find limoncello made from the island’s lemons in the Piazzetta to bring home.

Situated on the ruins of the Greek walls in the heart of the old town center, Ristorante Buca di Bacco is a great place to eat grilled fish without breaking the bank.  The restaurant also has an extensive wine list.  Reserve the table next to the panoramic window for a fantastic view and order the famous pizza “sfilatino”!  From the Piazzetta, walk through the passageway to Via Longano and you’ll find the restaurant within just a few steps.  Open Thursday through Tuesday.

From the Marina Grande, board a bus to Anacapri (a 20 minute ride on a minibus).  Buses run every 15 to 20 minutes and a single ticket costs 1,80 €.  From here, take the chairlift to the summit of Monte Solaro for the most spectacular views of the Bay of Naples and Salerno from 589 meters above sea level.  You’ll be able to see the historic center of Capri, the Faraglioni, Mount Tiberus, Punta Campanella and the Sorrentine peninsula.  The chairlift takes 12 minutes to reach the summit and costs 10 euros to ride.  It runs from 9:30 am to 5:30 pm from March to October and 10:30 am to 3:00 pm from November to February.

Enjoy lunch at Il Riccio restaurant, the beachside restaurant of the Capri Palace Hotel on Anacapri, approximately a 20 minute ride from Capri and a 10 minute ride from Anacapri.  The restaurant is right near the Blue Grotto with a homey picturesque atmosphere and breathtaking views over the sea.  The food is exceptional and only the freshest local ingredients are used.  Enjoy the dessert buffet while basking in the gentle sea breeze!

You can either ride the chairlift back down or make the 30 minute walk on foot, stopping to visit the hermitage of Cetrella (the site of what was once the writer Compton Mackenzie’s home).  Before taking the bus back to Capri, make sure you visit Villa San Michele, the house museum created by the 19th century Swedish writer and physician Axel Munthe, that boasts one of the island’s most panoramic and beautiful views from the terrace.  In addition to being a beautiful place full of light, it also houses Munthe’s collection of art, archeological treasures and a sphinx that looks out over the sea.  It’s truly a magical place that needs to be experienced!  The entrance is 6 euros and is open from 9:00 am until an hour before sunset.  Concerts and cultural events are held in the evenings in the chapel or the gardens.

Walk through the center of Capri town along a series of scenic lanes with a sweeping view from the Marina Piccola Bay at Via Krupp to the Faraglioni to the Augustus Gardens, panoramic gardens and incredible feat of engineering.  The Augustus Gardens are in a historic property adjacent to the Charterhouse of San Giacomo, purchased by the German industrialist Friedrich Alfred Krupp at the beginning of the 1900s to build his residence on Capri.  Entry to the Augustus Gardens costs 1 euro from the beginning of April to the beginning of November.  The best times to visit are early morning and late afternoon due to fewer crowds.  Venture up to Via Krupp, a historic switchback paved footpath connecting the Charterhouse of San Giacomo and the Gardens of Augustus area with Marina Piccolo, for an amazing view of the cliffs and water.  Commissioned by Krupp, the path covers an elevation difference of 100 meters.  Via Krupp is currently closed due to the danger of falling rocks but can be viewed from above from the scenic overlook in the Augustus Gardens.

Be prepared for a dining experience unlike any other!  Tucked away in the side streets and alleys above the marina is an enchanting, romantic, fairy tale of a restaurant that is Da Paolino Lemontrees.  The tables are nestled under the lemon groves so you feel like you are sitting in your own romantic garden while you dine above the lemon trees.  The food is divine and the portions are very generous.  The servers bring you complimentary homemade limoncello and it was so good that we bought two bottles to bring home with us.  My personal favorite was the complimentary dessert buffet with anything and everything your heart would desire, complete with a gelato bar! 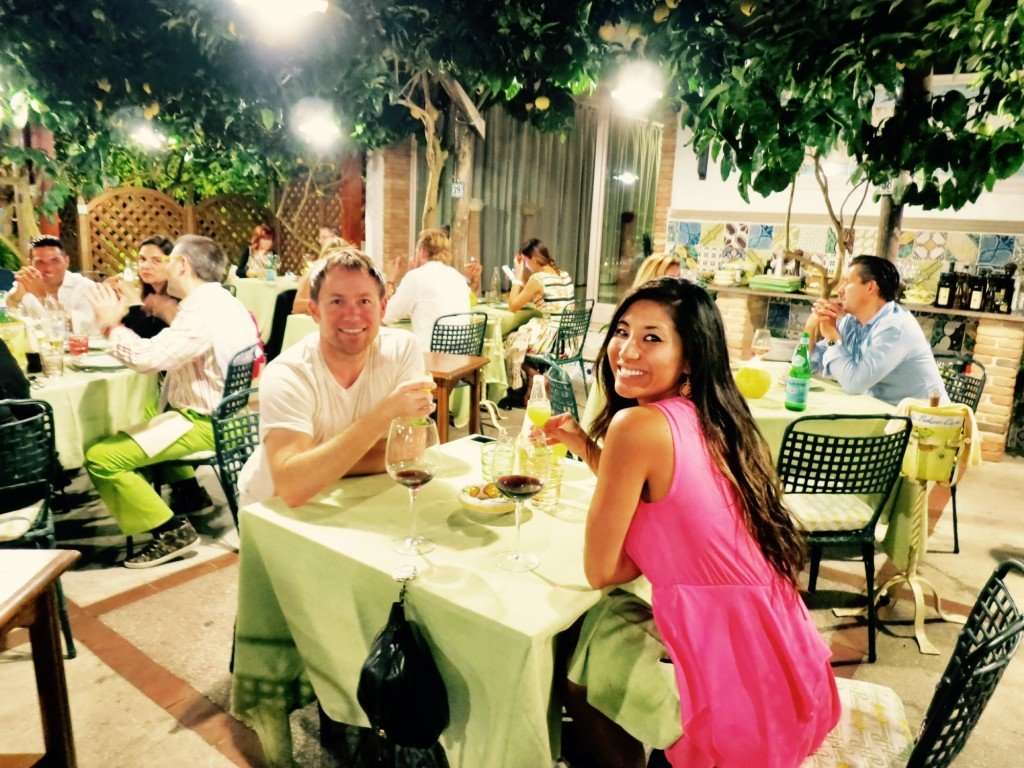 Dining under the lemon trees at Da Paolino 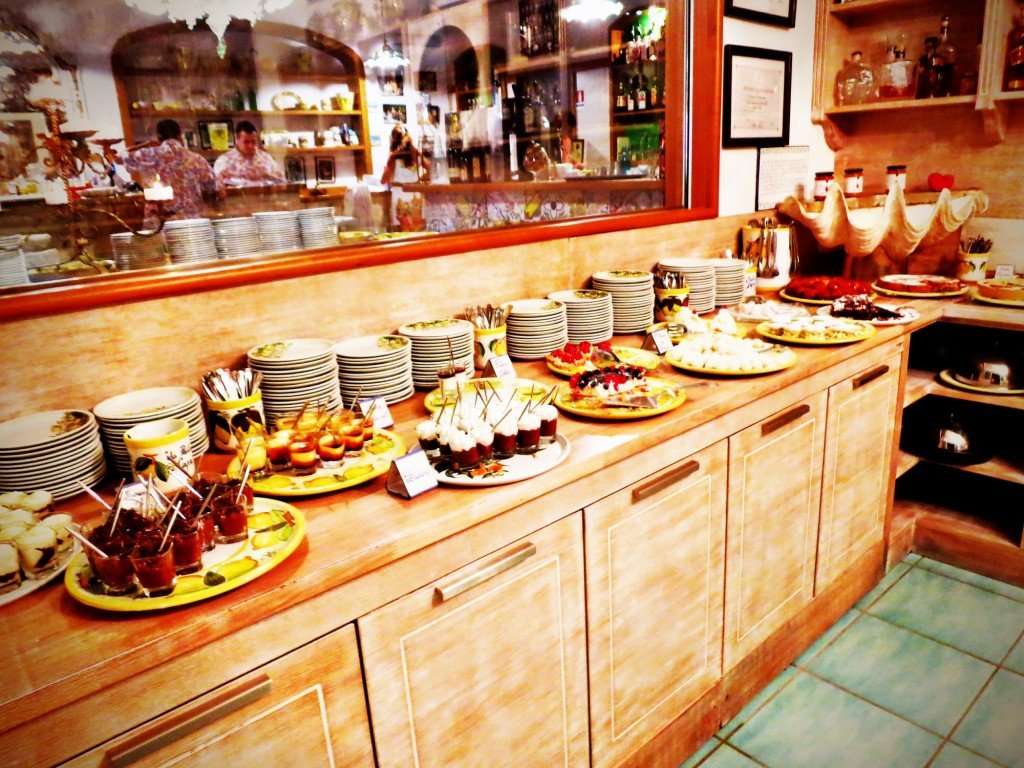 If you want to sample the nightlife but don’t want to get caught up in the “touristy” bars of the Piazzetta, check out Quisi, the terrace bar of the Grand Hotel Quisisiana.  Anema e Core (“soul and heart”) is the best known club on the island is where you can grab a drink while listening to the band.  Panta Rei is a relatively new club that has a restaurant, bar and spa area with pool that was created by owner/architect Massimo Esposito who also designed the newest 5-star Villa Marina hotel on the island.

As soon as you wake, head down to the private jetty in Marina Grande, the departure point for boat tours for the Blue Grotto (on the same dock where most of the hydrofoils from the mainland arrive).  You’ll want to purchase a ticket for the full circle island tour by sea that will take you to the Blue Grotto and sail you through the arch in the Faraglioni rock formations.  The Blue Grotto is a remarkable cave through which sunlight passes through an underwater cavity and shines through the seawater, creating a blue reflection that illuminates the cavern.  The cave extends some 50 meters into the cliff at the surface and approximately 150 meters deep with a sandy bottom.  Entrance to the grotto is 13 euros.  The tour lasts approximately two hours and costs 15 euros.  These tours tend to book up quickly so morning is your best bet!  You can also hire a private boat which is more expensive but you can stop wherever you want to swim. 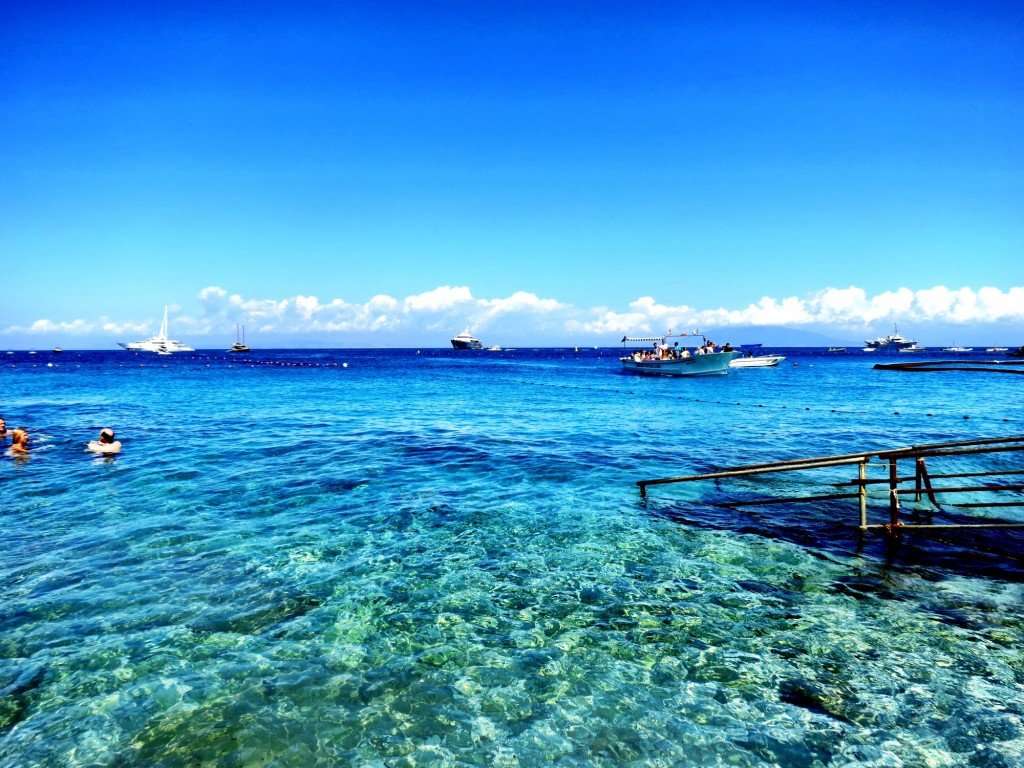