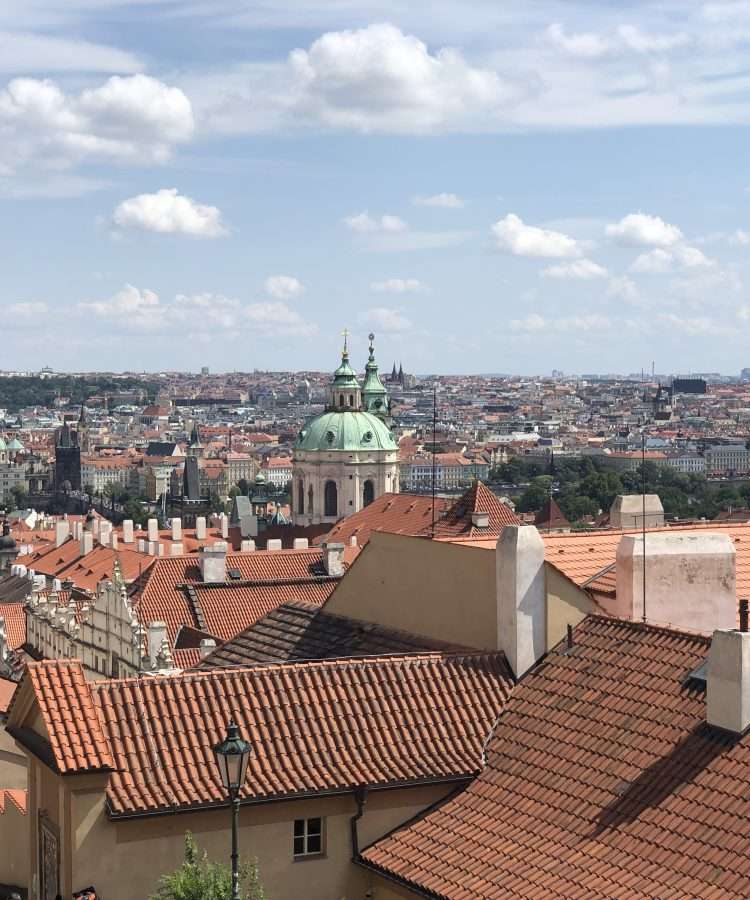 They say the city of romance is Paris but I believe it truly is Prague!  The capital and largest city of the Czech Republic, this sparkling city situated on the Vlatva river is a political, cultural and economic center of central Europe.  It is the 14th largest city in the European Union and the historical capital of Bohemia.  You’ll find influence by the Gothic, Renaissance and Baroque eras in this charming city and will get lost wandering in its fairytale streets.  Your dollar will still go a long way in Prague so take advantage of this while you can (read: many Czech beers)!

Given Prague’s temperate oceanic climate with relatively warm summers and chilly winters, you’ll want to visit in early Fall in order to take advantage of the temperate climate while beating the summer crowds!  Prague is known for its extreme brutally cold winters to hot hot summers and the weather is pleasant in between in the spring and fall months.  Snow is rare in the city, but it can happen!

Vaclav Havel Prague Airport is the international airport of Prague, approximately 17 kilometres north of the city.  All international flights arrive at this airport and there are no other civil airports in Prague (although Prague ahs three smaller airports and several landing areas for helicopters).  An uber ride is approximately 25-30 minutes into the center of town and will run you around $30 USD. 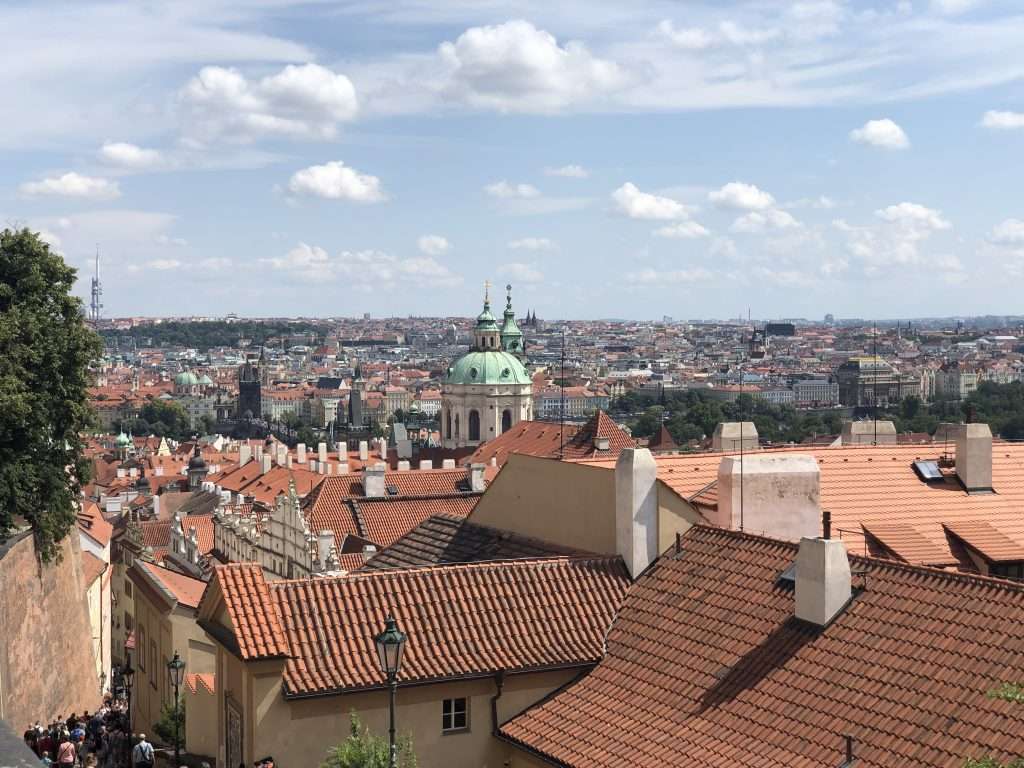 Aria Hotel Prague is a charming hotel located in the Lesser Town neighborhood and walking distance of iconic attractions like St. Nichola Church and Prague Castle.  The property features a private entrance and its 51 rooms and suites are inspired by contemporary, classical, opera and jazz music.  The property offers the Music Box – an entertainment room with an LCD screen, Blu-ray player and video game console – and an atrium lounge with a grand piano.  CODA restaurant, the hotel’s Czech-influenced fine dining establishment serves delicious (but pricey) meals.

Alchymist Grand Hotel & Spa is a boutique hotel housed in a baroque-style building from the 16th century and is just steps from restaurants, shops and top Prague attractions like Prague Castle and Charles Bridge.  The romantic décor that is found throughout the hotel is encompassed by its gold-trimmed furniture, arched doorways and grand chandeliers.  With only 29 rooms and 19 suites, the hotel feels quaint although the walls are on the thinner side.

Get settled and stroll into Old Town and peruse the cobbled streets filled with eclectic street performers and vendors.  Listen to the musicians play, marvel at the architecture and soak the city in!  You’ll want to make your way to the Prague Astronomical Clock which dates back to 1410 and anchors the center of the town and strikes every hour.  The clock contains three main components: the astronomical dial, representing the position of the Sun and Moon in the sky and displaying various astronomical details; statues of various Catholic saints stand on either side of the clock; “The Walk of the Apostles” a clockwork hourly show of figures of the Apostles and other moving sculptures; and a calendar dial with medallions representing the months.  According to a local legend, the city will suffer if the clock is neglected and its good operation in placed in jeopardy; a ghost, mounted on the clock, was supposed to nod its head in confirmation.  According to the legend, the only hope was represented by a boy born on New Year’s night.  Be aware, the crowds can gather quickly so the best time to visit is early morning.  Look up or else you’ll miss the gorgeous statues on rooftops! 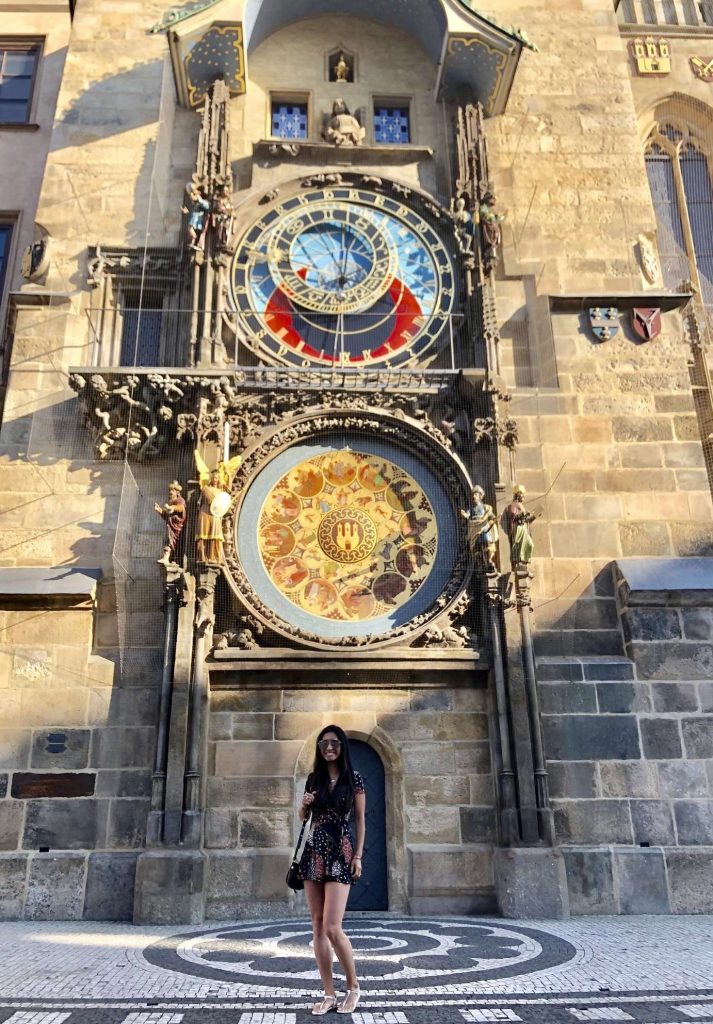 You won’t be able to walk the streets of Old Town without bumping into several Trdelnik stands.  A traditional Slovak rolled pastry originating from the Hungarian-speaking region of Transylvania, the trdelnik is usually served warm and topped with a dusting of sugar, nuts or cinnamon…or any topping of your choice!  This delectable treat is made by wrapping the pastry dough around a wooden or metal stick, roasting it over an open flame and coated with sugar or cinnamon.  Horice rolls can also be found all about town (wafer like tubes filled with fluffy cream and hot melted chocolate).  Delicious!

You will probably have worked up an appetite by now after the Trdelnik so head to the rooftop bar at the U Prince Hotel for a drink and dinner.  Situated in the heart of Old Town Square, this intimate rooftop bar and restaurant is the ideal place to watch the sunset and look over the bustling town below.  With views over the main square, Tyn Church, the Astronomical Clock and vistas over to Prague’s castle, this is a hot spot during the summer for evening cocktails and romantic dinners.  As part of a five star hotel, the menu is on the pricey side and due to its small rooftop location it does get extremely busy.  Reservations are a must! 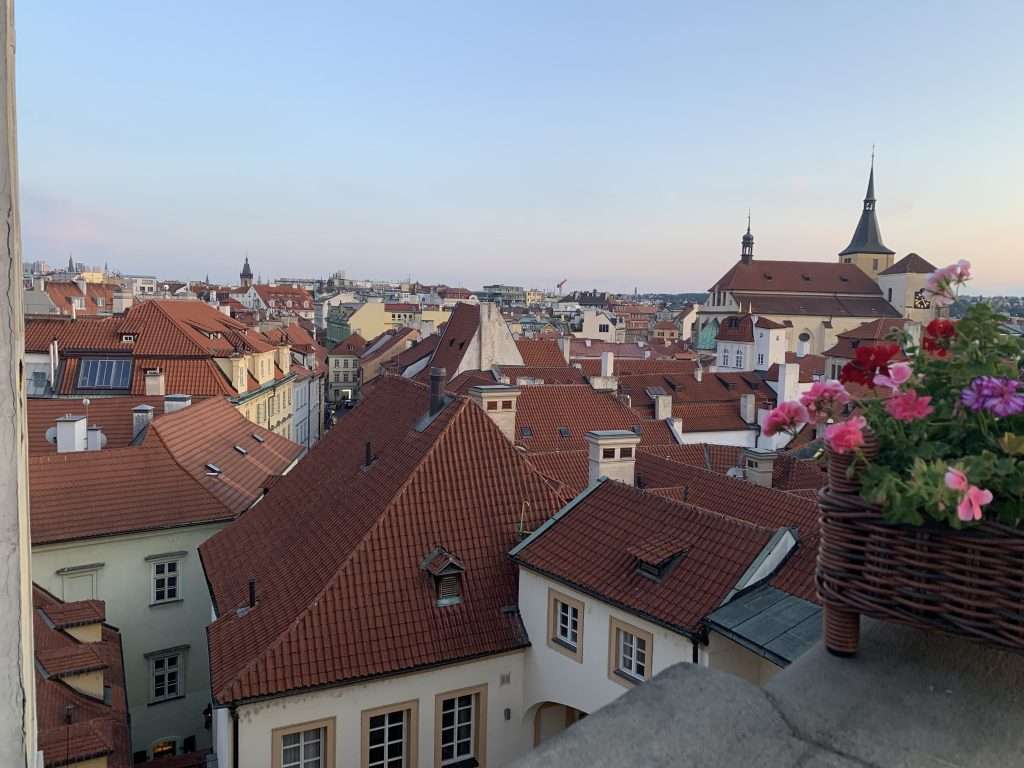 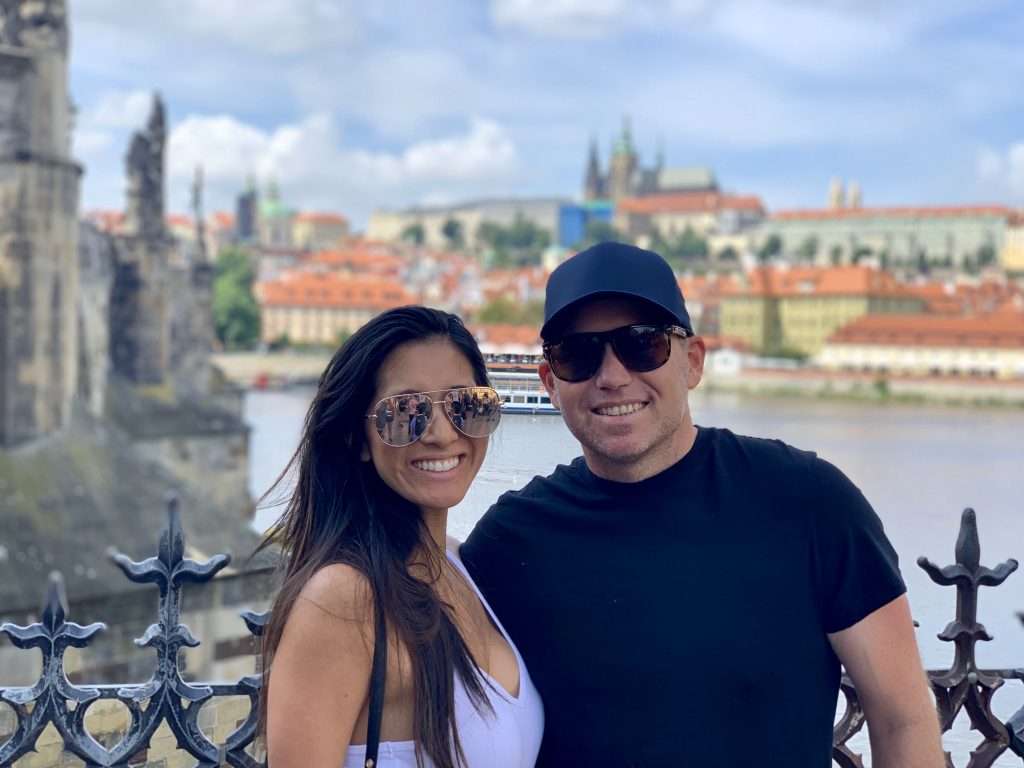 Wake up bright and early in order to take in the charm of the city without the hustle and bustle of the crowds.  Walk The Charles Bridge as the sun comes up in order to savor the tranquility and to obtain the best photos you will take all trip (otherwise the bridge fills with tourists and makes it all but impossible to take photos)!  The Charles Bridge, the most iconic place in all of Prague, is lined with a cobblestone path and giant Baroque saint statues guide you across the Vlatva River. 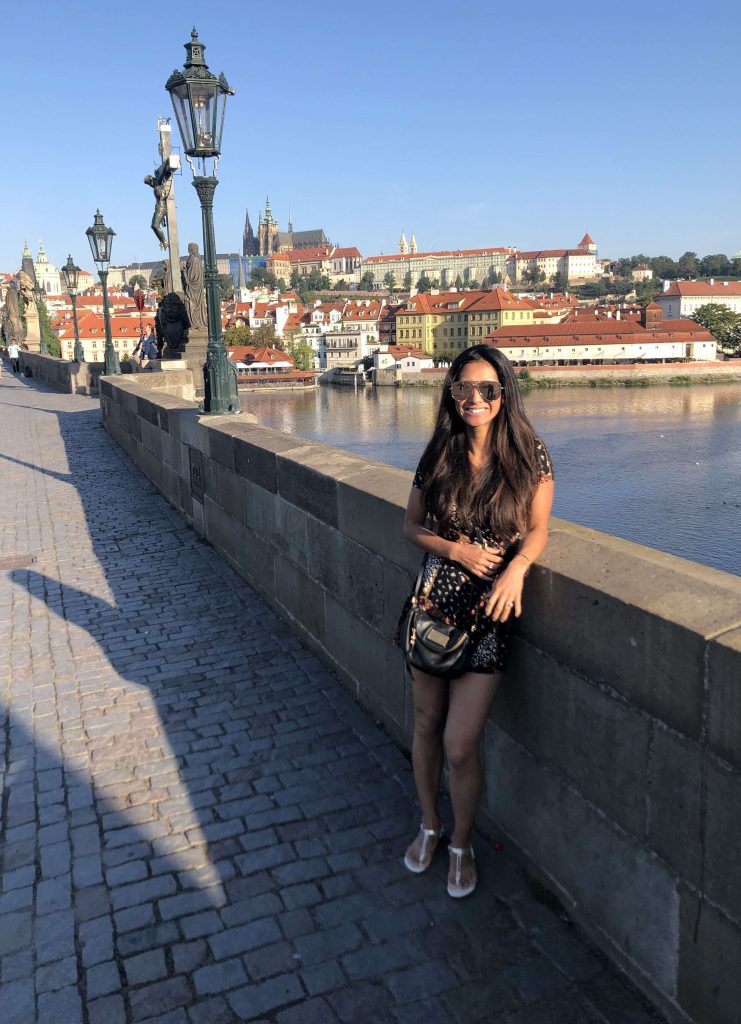 From the Charles Bridge, make your way up the hill to the Prague Castle, taking time to enjoy the sweeping views of the city and the river below.  You cannot visit Prague without visiting the castle, if not for its fascinating history and centuries-old architecture but for its pure beauty and magnificence.  Once the home of Bohemian monarchs and emperors, it is now the official residence of the Czech president.  The Prague Castle grounds are open daily from 6am to 10pm but the monuments don’t open until 9am.  There are 3 entrances to Prague Castle, all which have security checks.  Spread over 18 acres, there is much to explore at the castle.  The Old Royal Palace is one of the oldest structures in the Castle Quarter, dating al the way back from 1135.  Originally used by Czech princesses in the 12th centry, it eventually became the king’s palace from the 13th to 16th century.  Vladislav Hall, the largest hall in medieval Prague with late Gothic elements, is famous for its ribbed vaulted ceiling with five domes and Italian Renaissance windows.  In the 16th century, Vladislav Hall hosted all of the Bohemian court occasions, including tournaments, banquets and coronation ceremonies.  It still hosts various celebrations today.

The MUST-DO of all of Prague is visiting St. Vitus Cathedral at Prague Castle.  Towering over the castle grounds, its the most important church in the Czech Republic.  Despite being a predominantly Gothic structure, Baroque, Renaissance and Romanesque influences are also represented.  Admire the detail in the carved doors, arches and gargoyles that decorate the massive exterior of the cathedral. 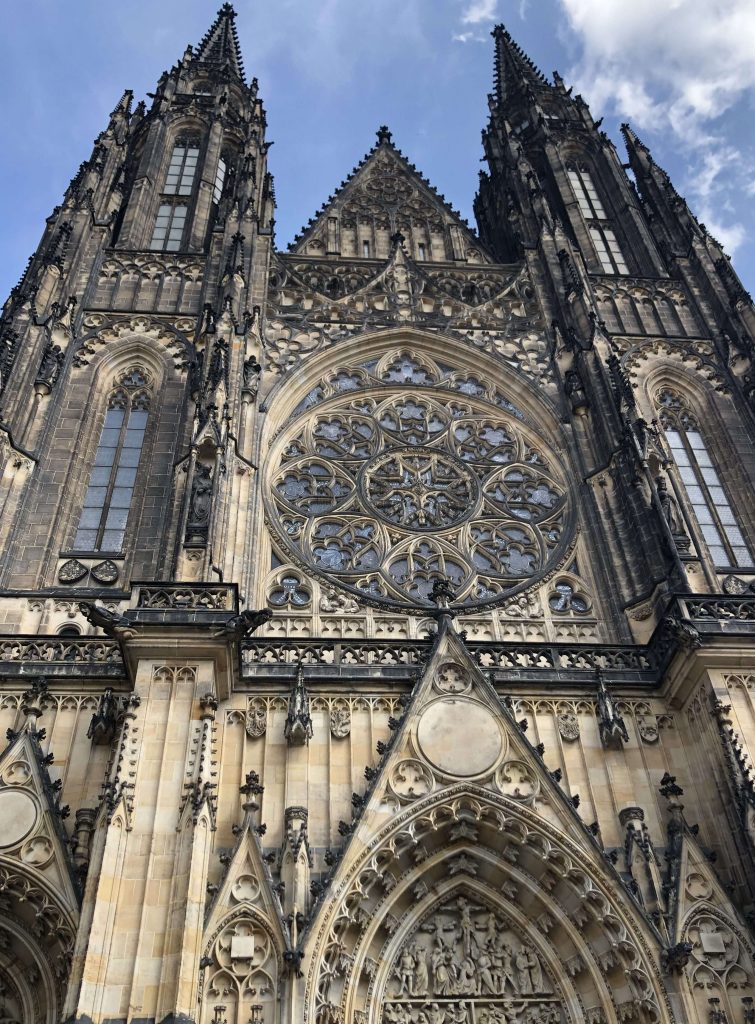 At the heart of the twin spire cathedral is St. Wenceslas Chapel, where you can find the tomb containing the relics of the iconic Czech patron saint.  Marvel at the Gothic frescoes, stained glass windows and walls decorated with Bohemian gemstones.

Situated in the north-east corner of the Castle Quarter, Golden Lane is a charming cobblestone street lined with tiny 16-th century houses.  Make your way back to old town for a bite and a famous Czech beer!  Whether you enjoy beer or not, you must give one a try in Prague.  It’s as pure as the water from a mountain lake – and you don’t have to pay a pretty penny.  If you’d like to try a beer flight, head to the Prague Beer Museum (which is more a bar than an actual museum).  You are bound to find something delicious for everyone at Lokal, a local beer hall with authentic food and of course, beer! 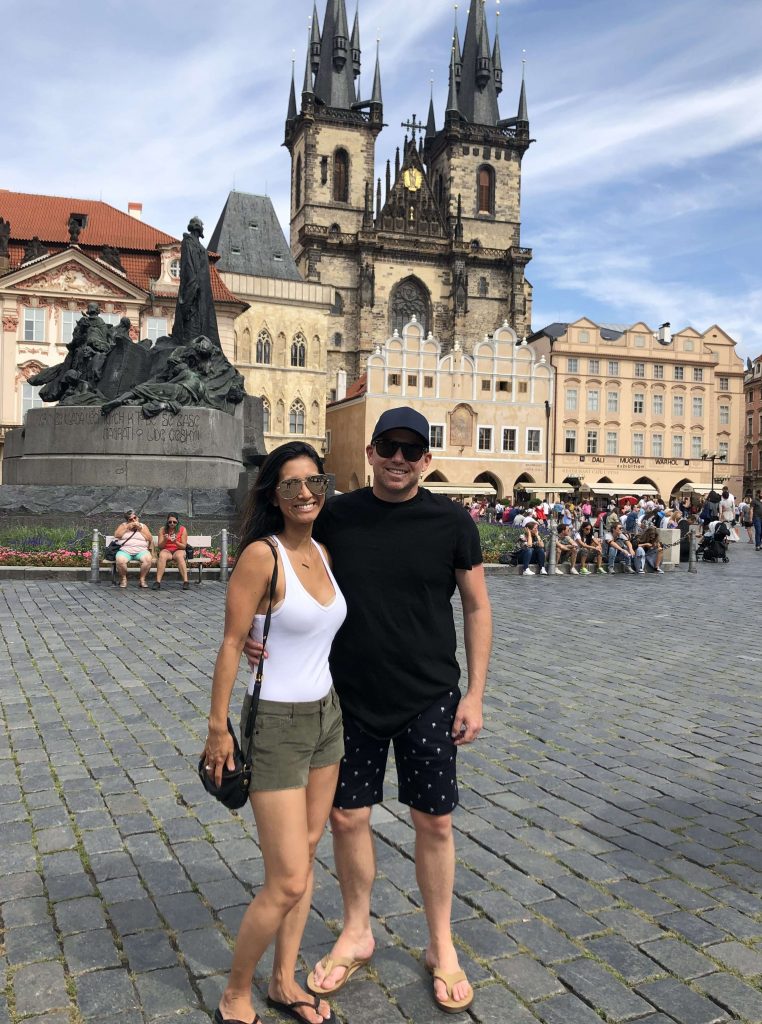 About to indulge in bratwurst and a beer!

You would never expect it, but Prague is very well known for its Thai massages!  After walking all day, rest those tired muscles and let the relaxation set in.  If a Thai massage isn’t your thing, try a foot rub or shoulder rub instead.  Again, like the rest of Prague, the prices are very reasonable.

End your day with a romantic River Vlatva dinner cruise.  The landmarks of Prague, beautifully illuminated by night, will leave you in awe as you travel down the Vlatva River enjoying dinner and music in a romantic atmosphere.  Most cruises are about 2 hours and you’ll enjoy a wide selection of delicacies!

If you didn’t make it out early the day before to enjoy Prague before the crowds invade, definitely to do today!  There is something to be said about capturing the pure beauty of the city when it is this calm. 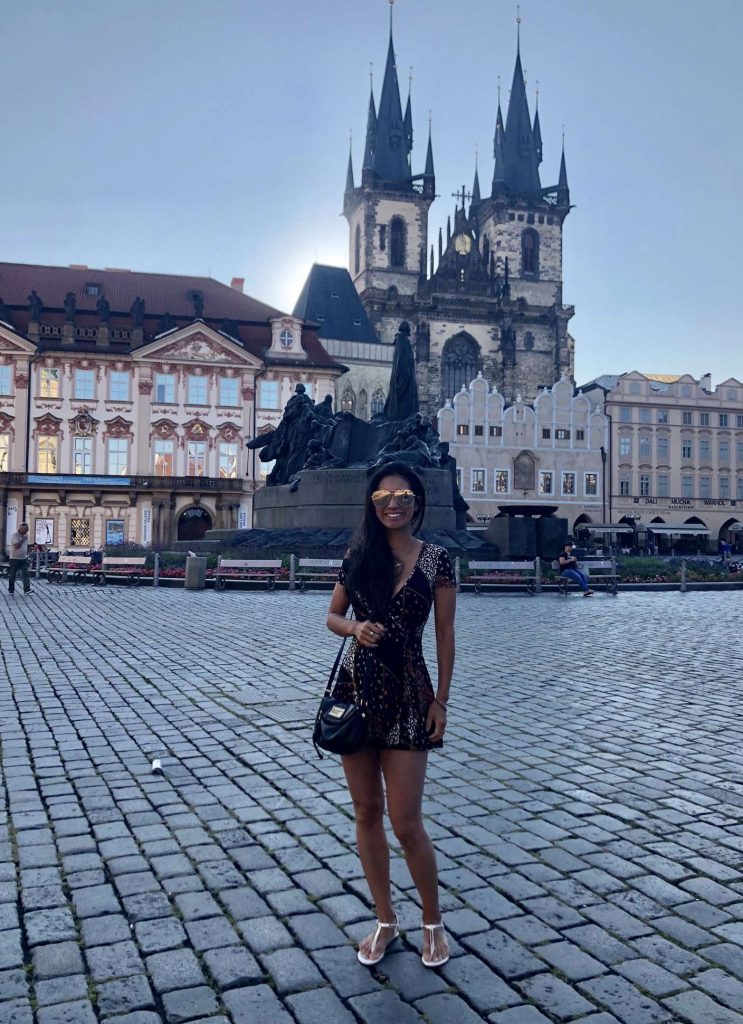 Old Town at sunrise, where is everybody?

For an intriguing and historical experience, visit the Old Jewish Cemetery in Prague, the final resting place of more than 100,000 people despite having just 10,000 headstones.  When space ran out, more earth was added to make room for more people.  The burial site now serves as a peaceful, yet poignant reminder of the catastrophic history Jewish residents throughout Central and Eastern Europe suffered.  You’ll want to visit the Jewish Quarter (located between the Old Town Square and Vltava River).  Most significant historical buildings were saved from destruction and today they remain a testimony to the history of the Jews in Prague. 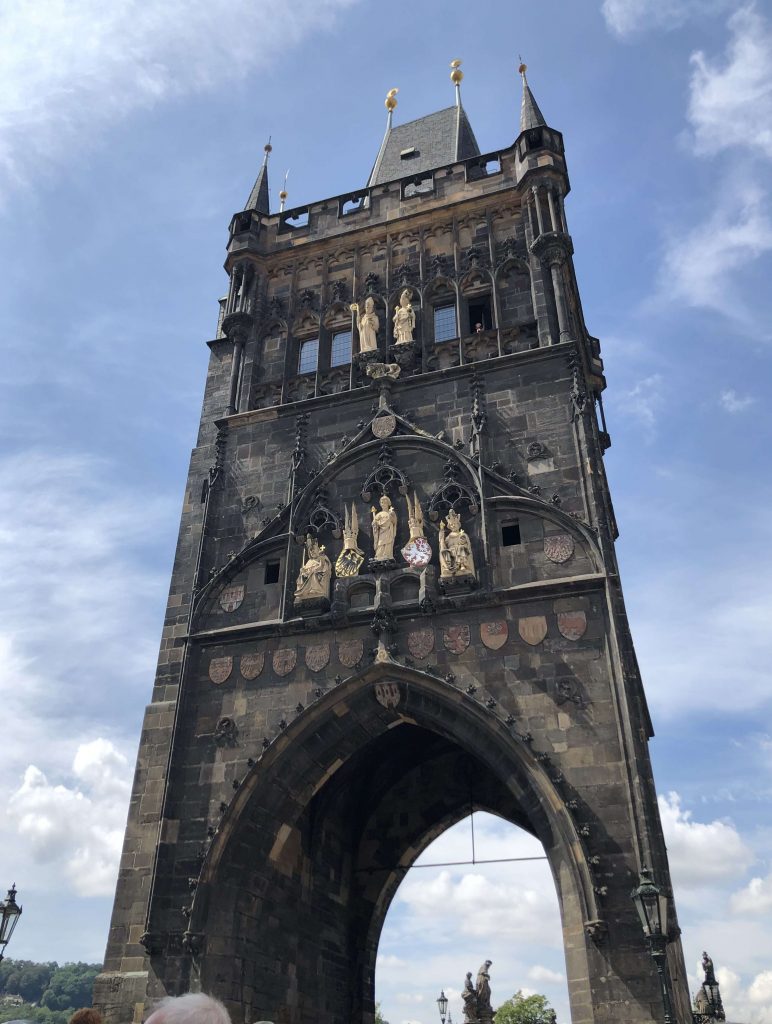 Climb one of Prague’s several towers for one last breathtaking view of the city.  The Petrin Observation Tower was inspired by the Eiffel tower in Paris and stands on a large hill overlooking Prague, providing a birds eye view of the entire city as the entire city is laid out in front of you.  The Old Town Bridge Tower is one of the most impressive Gothic structures in the world with great view in all directions.  To the east is Old town and all the towers and historic domed buildings and Charles Bridge and Castle District to the west.  The Town Belfry by St. Nicholas’ Church is taller than the other towers and provides close up views of the Castle district and Strahov Monastery.